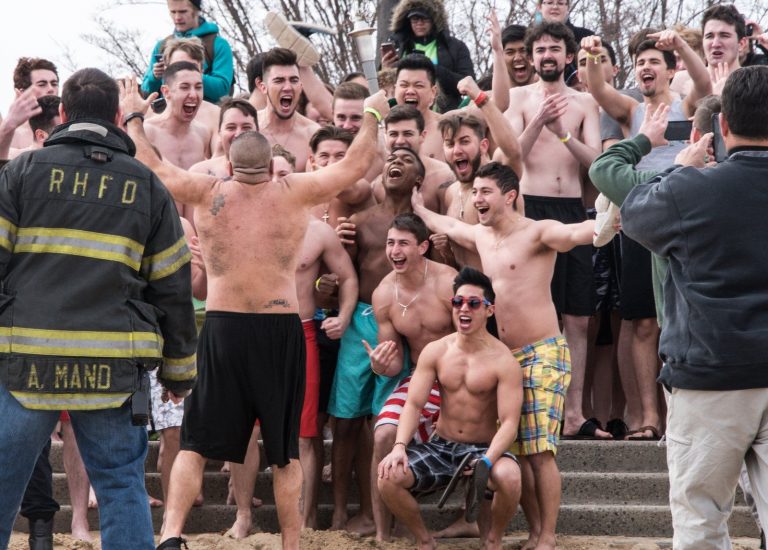 The event raised more than $65,000, according to Rebecca Strickland, associate director of development at Special Olympics New York in Long Island.

“It was great,” Strickland said. “The weather was beautiful, and we had a great turn-out. It was fabulous.”

The “Freezin’ for a Reason” event was intended promote awareness of people living with intellectual disabilities in New York as well as raise money.

All donations will go toward supporting Special Olympics New York’s programs and their athletes.

More than 1,000 people were present at this year’s event, according to North Hempstead Town Supervisor Judi Bosworth.

Included were those taking the plunge, spectators, and the media.

Special education teachers Sabrina Trigo and Jaime Parrella were just two of the 500 people taking part in the plunge.

“This is my ninth year doing it,” Parrella said. “I absolutely love it, I do it every year. Makes you feel so much better, reboots the system.”

Both Trigo and Parrella teach at The Vida Bogart School For All Children in the Bronx and said they enjoy raising money for the Special Olympics New York program and showing their support.

“We are both special education teachers so we raise money every year,” Parrella said. “Not all that much, couple hundred dollars but you get what you get.”

“For me specifically I have an autistic son so it’s important for me to be able to give to an organization that helps with kids like him, so it’s worth it,” Trigo said.

Trigo also said it was her first year participating in the Polar Plunge.

“I actually wanted to come to support but I was told I’d have to go in,” Trigo said. “It’s cold. It’s like walking into ice. I did go up to the waist give me credit for that.”

She added that more people should sign up and participate in the event.

The cost to support training and competition for one athlete for the sports season is $400.

To learn more or to register for a future event, go to www.polarplungeny.org