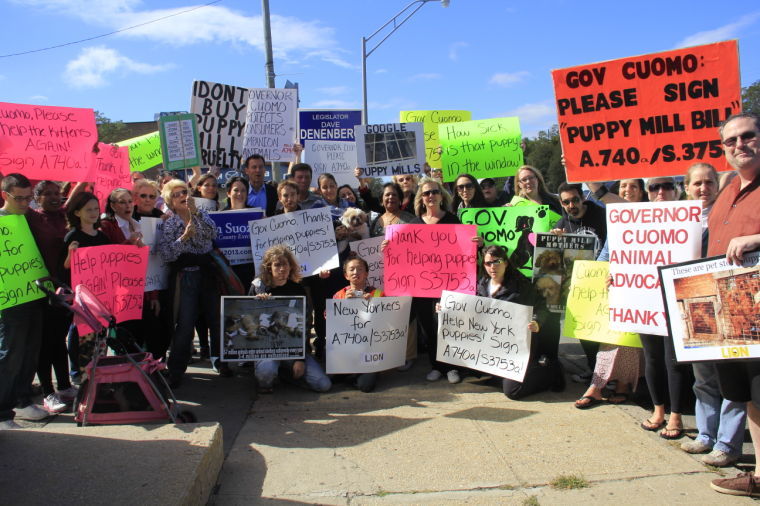 Members of Long Island Orchestrating for Nature gathered outside of Worldwide Puppies and Kittens last month to urge Gov. Andrew Cuomo to sign a bill that will allow local municipalities to regulate pet stores. More than 80 people stood in front of the store on Sunrise Highway with signs asking the governor to help puppies and kittens, making it the largest animal advocacy demonstration in Long Island history.

LION President John Di Leonardo said that he was pleased with the large turnout and that the protest was for a significant cause–for Cuomo to sign A.740-A/S.3753.

“We are asking Cuomo to sign this bill because federal and state laws are not doing enough,” he said. “Dogs are being mistreated in puppy mills and their welfare standards are not being monitored.”

Di Leonardo said that Cuomo spoke out against Worldwide Puppies and Kittens in 2009 for selling sick animals to the public.

According to a 2009 article in Newsday, customers of the pet store complained that they spent an average of $1,500 to $2,500 for purebred puppies who they later discovered were severely ill.

Newsday reported that the store paid back known victims and $20,000 in fees and penalties to the state in 2009 under an agreement with the state attorney’s general office.

“Consumers often walk away from pet stores with sick animals and hundreds of dollars in vet bills,” vice president Julie Cappiello said. “This would help us not only protect the animals, but the consumers as well.”

Nassau County Legislator Dave Denenberg was one of the many local politicians who spoke up for animals at the rally.

“All we’re asking with this bill is to have local municipalities have the ability to regulate pet stores in terms of where the dogs and cats are coming from,” Denenberg said.

“When animal lovers get involved in government, get involved with trying to address the problems that we face, you can make a tremendous difference,” Suozzi said. “You need to be political. Urge the governor to sign this bill to make sure that we stop this action of animals just being bred for profit without being concerned about the animal welfare itself.”