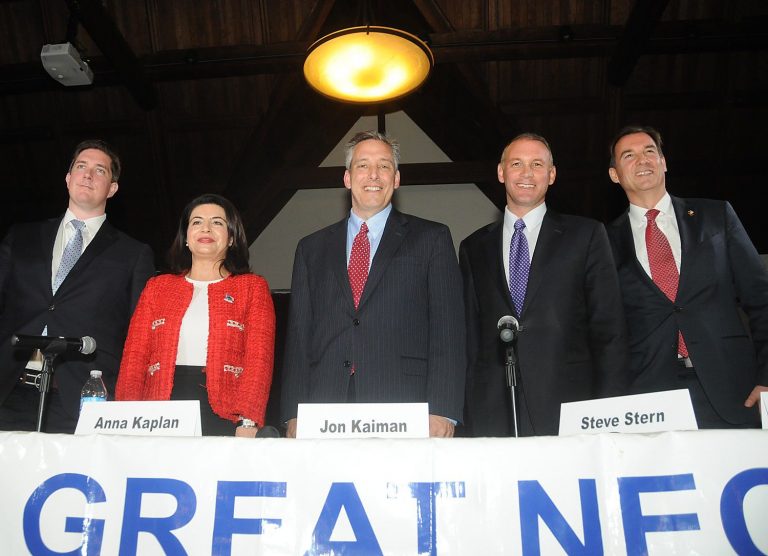 North Shore Democrats will choose their nominee on Tuesday for New York’s Third Congressional District in a five-way primary election that will cap more than five months of campaigning.

The Nassau County Democratic chairman, Jay Jacobs, said he expects around 15,000 of the district’s 194,508 registered Democrats to vote in the “low-turnout race.”

“I don’t think that it’s captured generally a large amount of interest, which tends to favor the better known candidates,” Jacobs said.

The five contenders emerged from a scramble set off by Israel’s surprise Jan. 5 announcement that he would not seek a ninth term. As many as 13 Democrats and five Republicans once considered runs in the district stretching from Whitestone, Queens, to Kings Park in Suffolk County.

After meeting with potential candidates and pushing the popular North Hempstead Supervisor Judi Bosworth to run, Jacobs and his Queens and Suffolk County counterparts declined to endorse a candidate.

Suozzi has been “the candidate to beat” since then, Jacobs said, given his strong base across Nassau County, which encompasses 50 percent of the district. About 30 percent is in Suffolk County and about 20 percent in Queens.

The others could do well in their strongholds, though, Jacobs said — Kaiman in North Hempstead, Kaplan in Great Neck and among women, and Stern in Huntington.

“Everybody has got something to rely upon,” Jacobs said.

The three county Republican committees have endorsed Martins and he will not face a primary.

The state Board of Elections ruled his challenger, Philip Pidot, a  financial investigator from Glen Cove, did not collect enough signatures from residents to get on the ballot. A judge reportedly threw out Pidot’s challenge to the decision.

Suozzi has been his opponents’ main target. Kaplan’s and Kaiman’s campaigns tried to bump him from the ballot by challenging his petition signatures, and Stern has attacked his record on taxes and abortion rights.

Suozzi survived the petition challenge and has called Stern’s claims misleading and distracting.

Jacobs has said a candidate would need at least $1 million to get through the primary, but Suozzi, the top fundraiser, has collected only $736,530. The presidential campaign and other recent races have likely tapped big donors’ pockets, and some may fear alientating one or more candidates by giving to another, he said.

“It’s my congressional district I’m one of the more regular contributors, and I haven’t given anybody any money,” Jacobs said. “And I’m not unhappy about that.”

Clarke has reportedly raised only about $4,800, soliciting small donations from individuals and eschewing special interest groups.

Suozzi has said the candidates’ political similarities make in-depth discussions of issues “futile,” and that his ability to “get things done” sets him apart.

Stern has heavily touted his endorsement from Israel, his fellow lawmaker and friend of 20 years, and his record on veterans’ issues, such as his Suffolk County proposal to turn vacant homes into housing for homeless veterans that Israel has pushed in Congress.

Kaiman has pledged to create a national version of Project Independence, the program he started as town supervisor to help senior citizens stay in their homes as they age.

Kaplan has said her unique life experience as an immigrant and as the only woman in the race equips her to best represent the ethnically diverse district.

Embracing an outsider identity, Clarke has called his more experienced opponents “basically the same candidate” and said campaign finance reform is essential to progressive change on other issues.