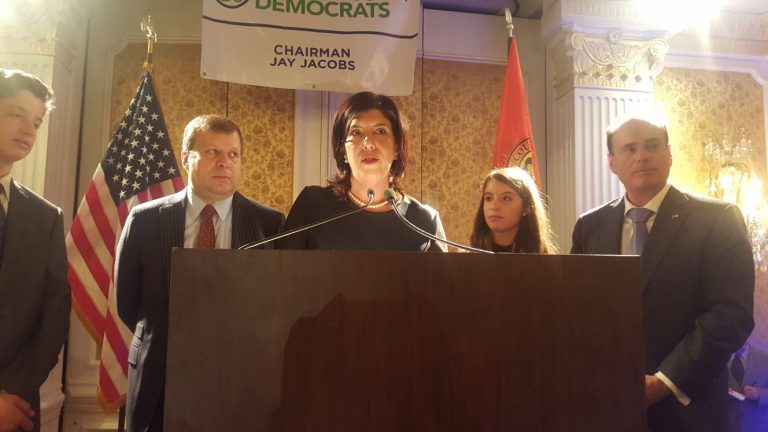 “This victory transcends Republican or Democrat,” Singas said at a gathering of Democrats in Garden City. “This victory means the voters put aside their partisan issues. The voters overwhelmingly said we’re going to put our community first.”

Speaking to fellow Republicans in Westbury, Murray said she had “never been prouder” of any campaign she had run.

“When you’re in a tight race, you see who your friends are, and my goodness, I never knew I had so many friends,” she said.

Singas, a Manhasset resident, took the $174,000-a-year job at the helm of the DA’s office in January, after her Democratic predecessor and current U.S. Rep. Kathleen Rice (D-Garden City) took office in Congress.

A graduate of Fordham University’s law school, she started her prosecutorial career at the Queens DA’s office in 1991 and eventually led its Domestic Violence Bureau. In 2006, Rice tapped her to run Nassau’s newly created Special Victims Bureau. She was there until 2011, when Rice chose her as her chief assistant.

Murray was elected Hempstead’s Town Supervisor in 2003, the first woman to ever hold the office, after serving two years as Town Clerk.

She has a law degree from Suffolk University in Boston and served as a state assistant attorney general in the office’s criminal justice section, working on civil cases related to prisons and inmates. She was elected to the state Assembly in 1998, where she helped craft criminal laws on the codes committee until being appointed to the Town Clerk seat.

The race pitted the relatively unknown Singas against Murray, an established name in Nassau politics.

Singas characterized herself as “a prosecutor, not a politician,” juxtaposing her 24 years as a prosecutor with Murray’s complete lack of experience trying criminal cases.

Murray, of Levittown, admitted she was not a prosecutor, but said the DA’s true role was to lead and manage the office as a “CEO.”

In an interview with the New York Daily News’ editorial board, Murray gave wrong answers to basic criminal law questions and passed on others, which the paper slammed her for in an Oct. 19 editorial as well as subsequent commentary.

Murray positioned herself as a “tough” DA, often saying Singas was too soft on public corruption, heroin and domestic violence — the issues that defined the race.

Both candidates promised to be tough on corruption, which voters named the county’s most pressing issue in two Newsday polls.

Murray often said she would prosecute officials accused of wrongdoing no matter their uniform or political stripe.

But Singas questioned whether she would follow through given her deep GOP roots, and tried to connect Murray to former state Sen. Dean Skelos and his son Adam Skelos, who were indicted on federal corruption charges earlier this year.

Singas touted her investigation into the county’s contracting process, which she called “a recipe for corruption” in an August report.

But Murray made her own accusations of corruption in the DA’s office, raising questions about Singas’ role in the office’s out-of-court settlements and what she called the “stonewalling” of a whistleblower.

Murray made heroin her top campaign issue, promising to unequivocally oppose sending any accused drug dealer into diversion courts, which place addicted defendants in treatment programs rather than jail.

She said Singas’ prosecutors never object to diversion, letting dangerous dealers go back out on the street.

She also touted her work with the county-wide Heroin Prevention Task Force and her recent efforts to make treatment more accessible for addicts.

Murray also charged that Singas was weak on domestic violence and the exploitation of women, arguably the hallmark of her career.

She said Singas “blamed the victim” in a 2006 domestic violence case and called for the firing of her top administrator, who was accused of “antisocial” sexual behavior by his estranged wife in divorce filings.

Singas called Murray’s claims dangerous while touting her work in the Queens Domestic Violence Bureau and her role in starting the Nassau Special Victims Bureau.

Murray cited her work with the Suffolk University Battered Women’s Advocacy Project, which Singas tried to dismiss as a once-a-week law school internship.

“You have to have a candidate that does an outstanding job and we have that in Madeline Singas,” he said.

GOP chairman Joe Mondello said Murray’s work as Hempstead supervisor and on the campaign trail inspired the many Republicans who won their races.

“It hurts that she’s not going to be the district attorney, but she’s got a great future with the Republican Party,” he said.