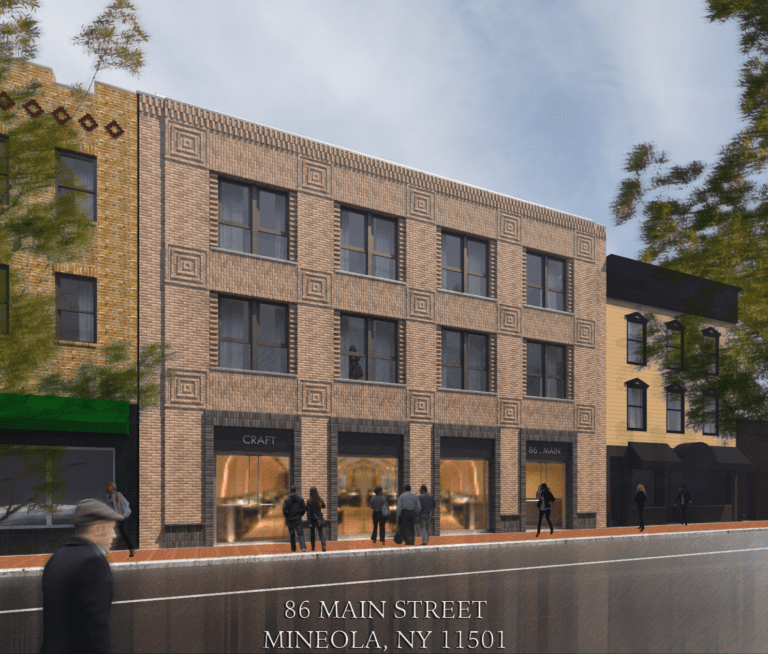 A decision on the development of a vacant lot and abandoned building in downtown Mineola into a four-story, mixed-use space has been reserved for a later date by the village board following a second public hearing.

Though a noticeably smaller crowd gathered in opposition of the project at 86-88 Main St. on Wednesday night than the first in November, issues of parking and overall congestion in the area were brought up by Fox’s of Mineola owner Bob Fox.

Fox is in favor of the long-term revitalization of the downtown area as part of the village’s Comprehensive Master Plan adopted in 2005, but it needs to be done with the short-term impacts in mind, he said.

“With all that’s going on do we really need to over-stress the situation now and throw this development right into the middle of Main Street?” Fox said.

Multiple construction projects are currently underway in the downtown area.

In addition to the construction beginning on the LIRR third track expansion project, construction is underway at both the Village Green across the street to erect a 266-unit apartment building and between Harrison Avenue and First Street on Mineola Boulevard for a five-level, 551-space parking garage. Sewer work is also scheduled to begin on Main Street in the near future.

The application for the development, submitted by property owner Joseph Puccio and Zambrano Architectural Design under the development incentive bonus which seeks to revitalize the village’s downtown, plans to construct a four-story, mixed-use building, with three floors of residential space totaling 10 apartments above a commercial space.

Village of Mineola Mayor Scott Strauss and the Board of Trustees expressed improvesd opinions on the development since the November meeting.

Suggestions were made by both the board and public to alleviate concerns over the building’s aesthetic and interior composition, and many were met, according to the board.

A prominent issue at the first meeting was the setback of the top floor, which, if visible from street level, would clash with the adjacent building’s roof.

The fourth floor was set back 10 feet initially and the developers have pushed it back another 10 feet for a total setback of 20 feet, attorney Marco Silva, representing Puccio and the development, said.

Another concern was the number of relatively small apartments, 11, that the development would include. The number has been reduced to 10 and the apartments are now larger, if only by less than 150 square feet, according to project architect Willy Zambrano.

Trustee Paul Cusato vocalized his own concerns regarding the project in November, but the changes to the project have “turned him around.”

“This could be the future of Main Street,” Cusato said, adding that the building’s rendering looked like it could be the downtown area’s new standard.

Zambrano and the development team have also adjusted the aesthetic of the proposed building, adding dentil-style cornices to the top of the structure as well as bordering windows.

Board members and residents alike agreed the new appearance was better than the last and emulates the historical style of downtown more appropriately.

Despite the adjustments the developers adhered to at the request of the board, parking resolutions were not offered, according to Fox.

Fox referred to a study, used by developer Kevin Lalezarian for the Village Green, that estimates 1.3 cars per apartment will be added once the building is complete, and suggested that the additional cars will have a significant negative impact on his 35-year old downtown business.

At the first hearing, Silva explained that the apartments will be designed for and marketed to younger professionals interested in access to nearby public transportation and a lively downtown.

In Wednesday’s follow-up presentation, Silva referenced a Dec. 18, 2018 demographic profile by Nassau County Comptroller Jack Schnirman that reported the county was struggling to attract and retain young people, deeming it a “brain drain.”

“The cost of living, particularly housing costs, has resulted in a ‘brain drain’ of educated young people moving out of Nassau County. Since 2000, the County has seen an 18 percent decrease in residents ages 25-44,” a summary of the report read.

The proposed apartments are exactly those that group of young people are looking for, according to Silva.

Strauss asked Fox for his own solution to the parking issue that Fox’s business contributes to.

Fox insisted that the board hold off on approving the development, allowing other projects like the expansion of the Village Green and the parking garage to be completed to alleviate the toll increased construction would have on parking in the vicinity of Fox’s shops and others.

Fox’s has it’s own private parking lot adjacent to and across the street from it’s store locations, but often allows patrons of other businesses to park there as well, according to Fox.

Fox’s will not be able to sustain business if the development were approved and construction began immediately, Fox said.

Fox, and Silva, suggested that Puccio is willing to delay the construction, considering the work currently underway and projects slated to begin soon.

Trustee Dennis Walsh suggested that construction start immediately if the project is approved, which other members of the board also expressed, in order to get all of the work done in a timely manner.

Deputy Mayor Paul Pereira told Fox that “the sky isn’t falling,” that the board is proud to have Fox’s business for so long and that he is confident in a few years time Fox’s will still be the downtown destination store it is currently regarded as.

Main Street and the downtown area can work for everyone, Pereira reiterated from the master plan.

The board ultimately voted to reserve the decision on the development for a later date.