Stanley Krause was a mover and shaker in Mineola.

He spent seven years as a trustee and served 11 consecutive terms as mayor. During his tenure, he constructed 15 parking fields, the community pool, library and elderly center.

But when it came time to honor him with a metal plaque last week, his name was misspelled.

Last Tuesday at Village Hall, elected officials, residents and the Chamber of Commerce gathered for the announcement that Krause was this year’s inductee for the John Davanzo Wall of Honor.

Mayor Scott Strauss, after officially unveiling the wall, made the announcement.

Confusion surrounding the correct spelling of Krause’s name over the years may have contributed to the error, Harris and village Clerk Joseph Scalero said.

Krause spent his entire life in Mineola, where his plumbing and heating company employed 100 people over 28 years. He died in May 2004.

In the late 1960s, Krause was the president of the New York Conference of Mayors in Albany and clerk to the Nassau County Board of Supervisors, Strauss said.

“He was a mover and a shaker, as all four of these gentlemen are,” Strauss said. “It’s tremendous what he has done and what they have done for the Village of Mineola.”

“Stanley Krause donated 100 percent of his salary to churches and charities in Mineola for some time,” Trustee Dennis Walsh said. “He put the lights on the Little League field, he created the code that let buildings be built on Old Country Road.

“There’s so many things that Mr. Krause did,” Walsh said. “He was a tremendous guy and really helped create this village.”

The induction of Krause fell on the night of the official unveiling of the John DaVanzo Wall of Honor. 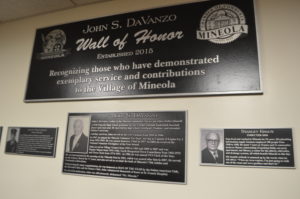 “This has been a long time coming,” Tony Lubrano, owner of Piccola Bussola restaurant and former Mineola Chamber of Commerce president, said. “Probably about four years ago Scott Strauss and I got together and talked about what we could do to honor the people who made this village what it is.”

A wall in the Village Hall lobby where Davanzo, nicknamed “Mr. Mineola,” once sat at a desk and greeted those who came in is now decorated with black and silver plaques dedicated to him, 2015 inductee Lou Sanders, 2016 inductee Edward Smith, 2017 inductee Louis Santosus and Krause.

DaVanzo was a Mineola resident his entire life, graduating from Mineola High School in 1938 before serving on the USS Glennon from 1943 to 1946, during which he survived D-Day.

In 1947, DaVanzo joined the Mineola Volunteer Fire Department, serving as captain of Engine Company 1 from 1953 to 1955. He received the National Volunteer Firefighter of the Year award in 2004 and was named an honorary chief in 2007.

“After he retired from the village board he came to me one day and said ‘I want to be the greeter at Village Hall’ and he said ‘just give me a desk and I’ll greet people as they come in’ and that kind of dignity and service that we rarely see today, that was John DaVanzo,” Martins said.

“This wall isn’t changing,” Strauss said. “The only thing that will change about it is the addition of future people who have certainly rose to the level of Mr. Mineola.”