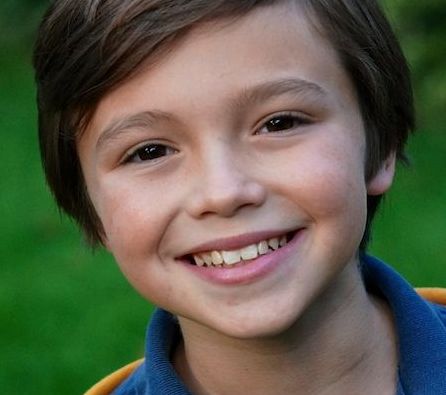 When Ben Hyland was three years old, he attended his first acting class.

At four, he landed his first agent, and at five, Hyland was cast as the young son of Owen Wilson and Jennifer Aniston in the 2008 film “Marley and Me.”

Now 11, Hyland, a sixth grader at Munsey Park Elementary School in Manhasset, has a resume that includes roles on television shows such as “Law & Order: Criminal Intent” and “Blue Bloods,” as well as three episodes of the direct-to-Netflix series “House of Cards.”

“I really like that I get to be a lot of different people all the time,” Hyland said. “It’s really fun to pretend.”

Hyland now jets between Manhasset and Toronto to work on the upcoming FX series “The Strain,” co-created by Guillermo del Toro and Chuck Hogan, in which he plays the son of the only man who can stop a virus from turning New York City into a concrete jungle of bloodthirsty vampires. The show is due to premiere sometime in 2014.

“I really like science fiction, so it’s cool that I’m in that kind of show,” Hyland said. “Guillermo is a really warm person and he’s very interesting, he could entertain you for hours. He also loves writing and is so into the story of ‘The Strain’ and he always talks about that, it’s really cool.”

Though he said filming on “House of Cards” got tedious at times, Hyland said he befriended his co-star, Daisy Tahan, who played his sister Sarah on the show.

“We had a lot of fun together,” Hyland said of Tahan. “We would get bored on set and play games and went to a lot of restaurants together.”

Ann Graf, the founder of the Manhasset-based Actor’s Garage studio and Hyland’s trainer since the start of his career, said she knew he’d be a star from the moment his parents brought him to his first class.

Graf, a former actress, maintained many of the relationships with the entertainment industry, said studio executives would often call her to recommend young talent.

When she received a call from the producers of “Marley and Me,” she mentioned Hyland even though he didn’t look like either Wilson or Aniston, as had been requested.

“I said, even if you don’t use him in this, there’s going to be something else you’ll want him for,” Graf said. “Not only did he get the role, they literally recast the other boys [who play Hyland’s brothers in the film] to look more like Ben.”

Hyland still takes classes at the Actor’s Garage, Graf said, and as her students get older she teaches a “5 W’s” technique to build their characters’ histories. Classes are filmed and performances are dissected, and the students eventually learn improvisation techniques.

“The one thing I will tell you is that every person I know who’s met Ben has said this kid’s going to be a huge star,” Graf said. “Nobody has ever said to me, ‘I don’t get this kid.’”

In his acting career, Hyland has worked alongside actors like Jeff Goldblum, Tom Selleck and Kevin Spacey, and said he would one day like to work with Adam Sandler, “because he’s really funny and I also want to know if he’s a nice guy.”

Hyland also recently starred in the Ralph Macchio-directed short film “Across Grace Alle,” – as a boy who copes with his parents’ divorce through a series of profound chance encounters with an attractive woman he sees through his neighbor’s window – alongside four-time Academy Award nominee Marcia Mason and Dancing With the Stars pro Karina Smirnoff.

In between filming scenes and rubbing elbows with Hollywood, Hyland works with a tutor to catch up on school work and maintain his assignments.

Hyland said his favorite class is social studies, though this year he’s writing more essays, and he’s also enjoyed learning about the human body in his biology class.

“Everyone at Munsey Park is really helpful and they e-mail me back right away and they’re really understanding about everything,” Hyland said.

Hyland said he wants to continue acting when he grows up and would even like to direct his own features, adding he comes up with ideas for stories in his mind before falling asleep at night. He’s also an avid reader who usually tackles two books at a time, and said he is now at work on the first installment of the “Artemis Fowl” series.

Hyland’s father, John, said he appreciates his son’s ride through the entertainment industry, but he doesn’t want to see the stars in Ben’s eyes get too bright. John and wife Amy have two other sons at Munsey Park Elementary School – Colin, a first grader, and Jack,  a fourth grader.

“It’s a great project, and my family and my wife’s family are all big movie fans, but we have two other boys and it takes up a lot of our time,” John said. “When he was five years old, it was fun and cute and they were just kind of window-dressing him, but now that he’s 11 we’re at the next stage with more speaking roles and it’s like, this is what we’re really doing now. It’s really a great commitment he has to make, that we all have to make, but it’s been fun.”