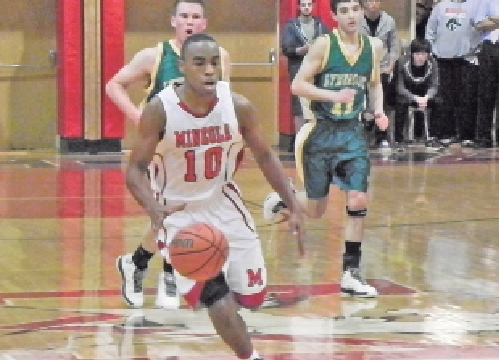 In their first round of the Nassau Class A playoffs, the Mineola Mustangs varsity boys basketball team defeated the Lynbrook Owls 60-47 on Friday night at Mineola High School.

Led by Stephen Gessner with 21 points, Malcom Brown with 12 points and Bobby Rogers with 10 points, a roaring crowd of Mineola residents and school officials the Mustangs moved to 14-4.

Team captains Mike Waszczuk and Brian Gaffney had a combined 12 points, with Gaffney scoring one 3-pointer.

“We played great defensively, we stuck to our plan and played our hardest,” Mustangs head coach Jim Heggman said.

The Mustangs enjoyed a strong advantage in both offensive and defensive rebounds, and took advantage of a number of Lynbrook turnovers.

Starting from a 21-point deficit at halftime, the Owls struck back by outscoring the Mustangs in the second half, but it was too little too late.

The Mustangs outshot the Owls from the free throw line, putting a total of 18 points to the Owl’s six.

John Boni and Matthew Murphy each scored 14 points each for the Owls, including three 3-pointers for Boni and two for Murphy.

Mineola’s defense forced Lynbrook to take outside shots, where they scored five more 3-pointers than Mineola.

Owls head coach Chris Rube gave each of his players on the 6-12 team a hug at the end of the game, congratulating them on a hard fought season.

Rube attributed the Owls’ struggles to a disadvantage in size and weight,

“We’re starting two forwards under six feet tall, and most nights they’re outmatched by 50 pounds and six inches,” he said. “I’m very proud of them, they gave everything they have and I can’t ask for anything more.”

Attending the game was Mineola Superintendent of Schools Michael Nagler, as well as other Mineola Board of Education members including school board Vice President Terrence Hale.

“It was a good clean game. I’m very proud of all the guys,” Nagler said.  “We’re having a great year with our seniors, I wish them all the best.”

“We have one of the strongest teams I’ve ever seen here, and I think we’re only going to move forward,” Hale said.

The Mustangs missed their chance to win their A-IV Conference with a 78-63 loss to Valley Stream North last week. They were set to face Roslyn in a quarterfinal game at home on Tuesday night at 6:30 p.m.