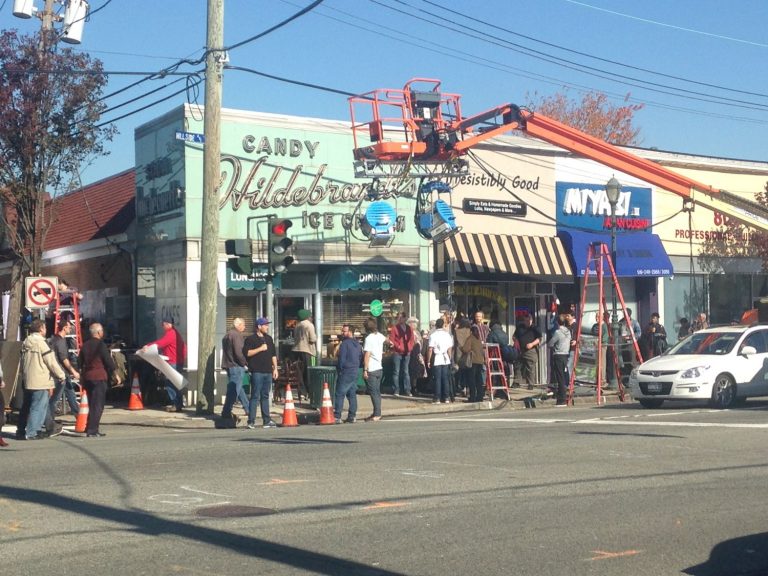 A Williston Park restaurant is getting some time in the spotlight on Tuesday.

A film crew was shooting scenes in and around Hildebrandt’s Restaurant at 84 Hillside Ave. for the upcoming film “The Book of Henry,” starring Naomi Watts and Sarah Silverman and directed by Colin Trevorrow of “Jurassic World.”

The crew filmed inside the restaurant and along tree-lined Cross Street to give the film a “picturesque and beautiful” suburban backdrop, location manager Tom Dunn said.

“It looks like small-town America, which is great,” he said. “… Having a lot of trees around as they’re changing with fall is a big help.”

Watts was on set in Hildebrandt’s, which serves as the diner where her character works as a waitress in the film.

It was featured on the Food Network’s “Diners, Drive-Ins and Dives” in 2011, which is how location manager Christopher Menges found it, Dunn said.

“The Book of Henry,” set to hit theaters in 2016, follows Watts’ character, a single mother of two sons who learns important lessons from one of them, a child prodigy, when she has to confront conflict in her neighbor’s home.

Village of Williston Park Mayor Paul Ehrbar said this is the first “full-blown” movie shoot that he’s seen in the village. He said the production group approached the village about filming a couple weeks ago.

Film shoots are good for the village, Ehrbar said, because they give business to local restaurants and draw attention to the area.

“It’s good for the community,” he said. “It puts us on the map a little bit better.

Besides Williston Park, the film has also shot at Grumman Studios in Bethpage and in Hudson Valley locations including Nyack, Mount Vernon and Croton Gorge Park, spokeswoman Amy Johnson said. Filming is expected to finish just before Thanksgiving.

Police are conducting intermittent traffic control on Cross Street between Winthrop Avenue and Meagher Place on Tuesday, but no roads will be completely closed.