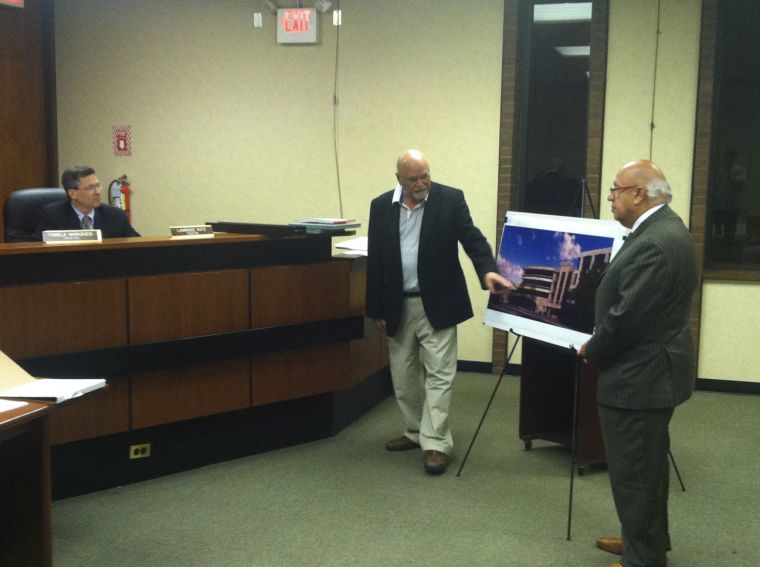 The Village of Great Neck Plaza Board of Trustees continued their review of a proposed retail-residential building at 5-9 Grace Ave. at their meeting last Wednesday in the latest step for a project that has been in development for over a year.

Developer and Great Neck Chamber of Commerce President Hooshang Nematzadeh provided the board with a survey and a water availability letter Wednesday night. He said those items were missing from the environmental assessment the board received before their Aug. 21 meeting.

“What we need to do is look at what conditions we want to impose as per the environmental assessment and representations you’ve made. I have started to put that together but I haven’t given that to the board or [Village of Great Neck Plaza Commissioner of Public Services Michael] Sweeney to bring it up to something we can pass,” said Village of Great Neck Plaza Mayor Jean Celender.

Nematzadeh said he spoke to his neighbor, the owner of the four-story office building at 11 Grace Ave., and addressed his concerns with the project. The neighbor’s main concern was a roof over the driveway that connected the two buildings, according to Nematzadeh

The neighbor also expressed concerns about the size of the driveway in a letter to the board dated Oct. 2.

“The 13-foot wide east driveway is too narrow and cars will be hitting my building as they pull in and out,” the neighbor wrote. Later in the letter he wrote he would like to see it widened to 15 feet.

Nematzadeh said that widening the driveway would affect the handicap area of the sidewalk.

The board voted to continue their review of the application to their Oct. 16 meeting

“You’re going to be very proud of this building,“ Nematzadeh said.

The board also accepted the application for Bare Bonez Fitness to occupy the building at 25 Cutter Mill Road.

Co-owners Chris Zito and Erik Gilmore are opening a gym in the aftermath of the closing of the New York Health and Racquet Club in Great Neck Plaza, where they both worked.

Gilmore said the gym would be “boot camp style, a lot of body weight exercises. There really is no machinery. “

Zito said they plan to offer one-on-one and small group training in their gym and want to accommodate all age groups and fitness levels. He said they even have a client who is 87 years old.

“We’d like to just offer as much as we can in a simple space that won’t take up a lot of room, without excess machinery and noise,” Zito said.

The closure of New York Health and Racquet Club has drawn protest, with residents voicing discontent with budget gym Planet Fitness’ plans to take over the site at a village meeting three weeks ago.