Manhasset Community Coalition Against Substance Abuse’s new project director Lesley Mazzotta has worked in the entertainment industry, the nonprofit sector and a couple of Manhasset churches before joining the organization.

Originally from Boston, Mazzotta moved to New York City after graduating from Tufts University with a bachelor’s degree in English and has lived in the city ever since.

Mazzotta said she began her career working for a Broadway producer and climbed the ladder to become producing director of Camp Broadway, an award-winning children’s theater arts education company.

From there she turned her attention to the nonprofit sector and founded After the Storm, an organization that used theater and storytelling to help children in New Orleans heal after Hurricane Katrina while helping rebuild community centers in the area.

Mazzotta later decided she wanted to use her educational gifts in a spiritual way and became certified as a spiritual director, working for both Community Reformed Church and Christ Episcopal Church as director of spiritual formation focusing on programming for women and children.

When CASA was looking for a new project director after the resignation of former director Cathy Samuels, Mazzotta was already familiar with the community and prepared to work more closely with the school district and families to educate parents and children about the dangers of drugs and alcohol, especially at a young age.

“What it’s really about is helping our youth become healthy socially, academically and emotionally, and that’s really been passion from my days on Broadway — making sure kids are healthy, their stress levels aren’t too high and they really have an understanding of who they are and they can find their identity,” Mazzotta said.

Six weeks into the position, Mazzotta said she is still learning the ropes but has enjoyed working with the CASA Youth Club at Manhasset Secondary School and beginning to interact with parents and students at their events.

Mazzotta said beginning next year, students will have the opportunity to participate in a six-week after-school program with PATV, where 12 students will be trained on the station’s equipment.

“Within six weeks, they’re going to be not only the crew but also the talent to create PSAs for CASA,” Mazzotta said. “It could be a message for prom or Red Ribbon Week in September.

It could be the CASA Youth Club talking about their activities or the student senate talking about healthy living. They’re going to be able to use their creativity to do something beneficial for CASA while learning a new skill.” 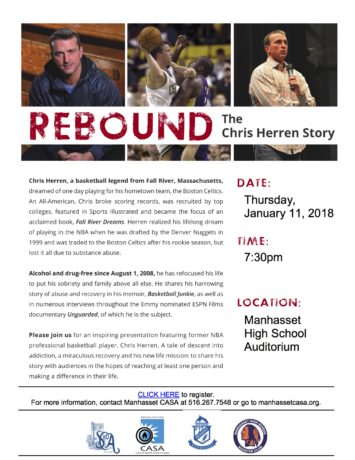 Motivational speaker Stephen Hill recently visited with students, teachers and parents on Nov. 15, and Chris Herren will be speaking at 7:30 p.m. on Jan. 11 in the Manhasset High School auditorium, and Mazzotta said the community is invited to the speech.

“I love that we can offer opportunities for the whole community to meet with young people who’ve lived through what the kids are living through now,who maybe didn’t make the healthiest decisions,” Mazzotta said. “It helps the kids have those mentors and those role models to look up to.”

Mazzotta said CASA offers resources to the community to support and educate as well as offer alternatives for minors. As the nation grapples with the opioid epidemic, Mazzotta said parents are constantly questioning how to keep drugs and alcohol out of their children’s hands.

“The people I’ve met know it’s an issue not only here but nationwide, and they want their children and other children to be safe and healthy, and I think they don’t know what to do,” Mazzotta said. “They come to our events and can encourage their kids to do the same, but what can they specifically do? I’m hoping CASA can not only offer tangible resources but also will be a vehicle for people to be inspired to play a role.

“Everyone has a role in this issue, and I would hope CASA by just being present in the community will continue to help people think about what they want their role to be.”