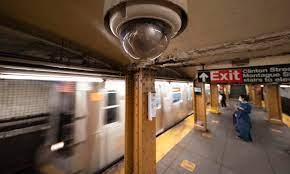 Security cameras, which are already ubiquitous on New York’s streets, will soon be installed in all of the city’s nearly 6,400 subway cars as officials work to rebuild riders’ faith in the system’s safety.

The Metropolitan Transportation Authority plans to put two cameras in each train car in a project expected to take three years to complete, Gov. Kathy Hochul said Tuesday as she announced the effort at a rail yard in Queens.

“You think Big Brother’s watching you on the subways? You’re absolutely right,” said Hochul, a Democrat. “That is our intent — to get the message out that we’re going to be having surveillance of activities on the subway trains and that is going to give people great peace of mind.”

Anticipating possible privacy or civil liberties concerns, Hochul said: “If you’re concerned about this, the best answer is don’t commit any crimes on the subway.”

“Living in a sweeping surveillance state shouldn’t be the price we pay to be safe. Real public safety comes from investing in our communities, not from omnipresent government surveillance,” he said in a statement.

New York City’s subway system already has more than 10,000 existing security cameras in its 472 stations that have played a role in solving major crimes, though the system doesn’t work flawlessly.

Security camera footage was crucial in helping investigators identify a suspect after a man shot 10 people on a subway train in Brooklyn in April, but the MTA’s system failed to record footage from cameras on the platform where the alleged gunman made his escape from a smoke-filled train.

Like most security cameras now found throughout New York City, the ones being installed in subway cars won’t be monitored live. But Hochul said they would still be valuable as a deterrent, since people will know they are being recorded, and that the footage could be valuable to investigators trying to solve crimes.

Even now, police routinely use footage from privately owned cameras mounted on buildings to document a suspect’s movements after a crime — though they often lose the trail if someone gets on a train.

The MTA received about $5.5 million in state and federal funding to purchase and install the cameras. About 200 cameras will be installed each month, with the project wrapping sometime in 2025.

Before the COVID-19 pandemic, New York City’s subway system had largely shaken its 1980s reputation as being filthy and crime-ridden, though complaints about overcrowding and reliability persisted. But after the pandemic emptied the system of riders, many New Yorkers began feeling unsafe underground again.

In an MTA survey of riders released this week, nearly 70% said there were too few police officers in the subway system; barely more than 50% said they felt safe or very safe in stations and on trains.

Hochul’s Republican opponent in the governor’s race, U.S. Rep. Lee Zeldin, has assailed her during his campaign of being too soft on crime.

Ridership on the subway system remains down over its pre-pandemic peak, but passengers have been returning in greater numbers recently, with some days exceeding more than 70% of the volume before COVID-19 struck.

So far this year, the number of crimes reported on public transit in the city is averaging slightly below the levels before the pandemic.