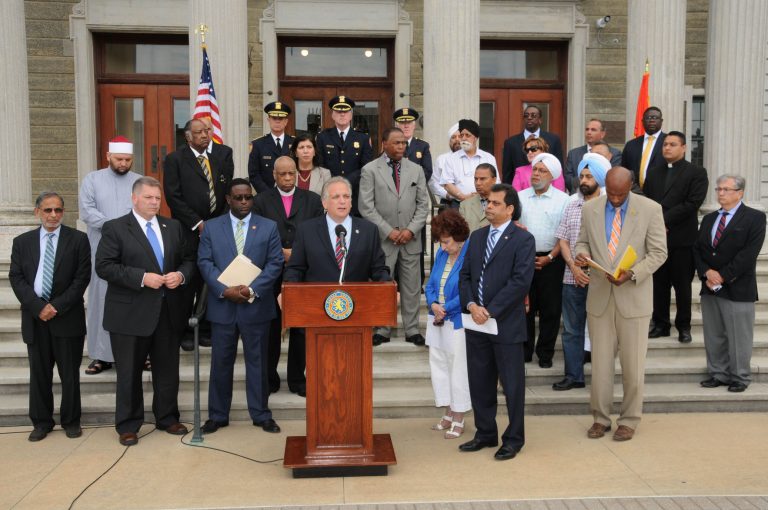 There has been an outpouring of support in Nassau County for the victims of Sunday morning’s massacre at a gay nightclub in Orlando, Florida.

The gunman, 29-year-old Omar Mateen, took the lives of 49 people and injured 53 others.

Nassau County Executive Ed Mangano held a vigil for the victims on Monday afternoon on the front steps of the Theodore Roosevelt Executive & Legislative Building in Mineola.

Religious leaders from the Christian, Sikh, Hindu, and Muslim communities, along with other local officials, attended the event in remembrance of the victims.

“Our solidarity confirms that there is zero tolerance for hate crime, zero tolerance for bias and zero tolerance for terrorism,” Mangano said. He also announced on Monday that, in light of the attack, the Nassau County Police Department has heightened local police presence and also dispatched officers to malls, gatherings of a significant size and important buildings.

Also present at the vigil were gay members of the community and activists from Long Island.

Pete Carney, director of Pride for Youth, a Long Island center for LGBTQ youth between the ages of 13 and 26, said:

“This hits at the core of our community. I am angry that we have been here before, and we are here again, and it seems much worse.”

Carney encouraged people to attend a vigil held later Monday evening at Pride for Youth also in honor of the victims of the shooting in Orlando.

“Your words and actions matter more than ever,” he said. “Our youth need to know their community embraces them.”

Many Muslim groups and leaders throughout the country have condemned the gunman, who mentioned allegiance to ISIS during a 911 call in the midst of the attack, and his actions.

“Islam preaches peace and acceptance of everyone in a nonjudgmental way,” said Isma Chaudhry, president of the Islamic Center of Long Island, in reaction to Sunday morning’s shooting. “A major objective of Islam is the preservation of life. These acts are strongly condemned by the religion, by me as a follower of this religion, and by our community.”

Trinity Episcopal Chuch in Roslyn honored the victims Wednesday afternoon by ringing its bell once for each person killed in the attack, joined by Muslim and Jewish faith leaders.

Local religious figures prayed for the victims and their families that evening at the Islamic Center of Long Island’s 13th annual interfaith iftar, the meal that breaks the daytime fast during the holy month of Ramadan.