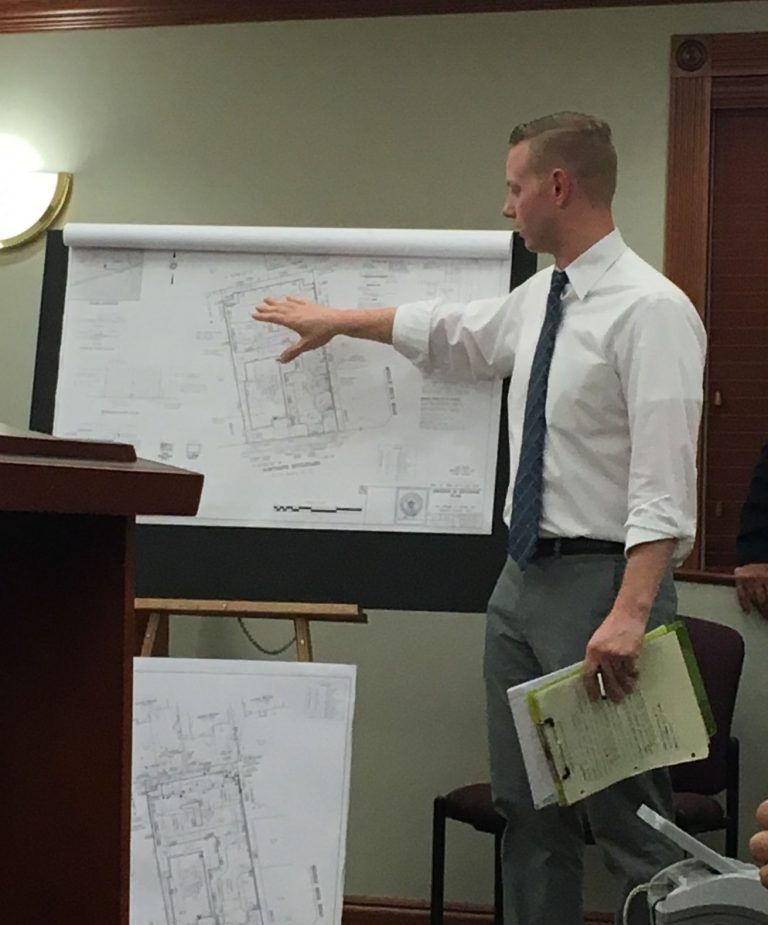 Flower Hill board officials on Monday reviewed a proposal to reconstruct the building and landscape at 1045 Northern Blvd. in Roslyn, which caused residents to voice concerns.

Property owner Michael Cohen  proposed to change what was  once a used-car rental business into a two-story building that would house a Yoga Works.

Anthony Guardino of Farrell Fritz PC, who  represented Cohen at the meeting,  said developers plan for Yoga Works to take up the 5,000 square feet on the second floor of the building.

He said they are unsure who will rent out the first floor, but expect it to be either a retail store or a restaurant.

The developers first appeared before the board on March 7, but were told the proposal could not be approved at the meeting because it hadn’t gone before the zoning board, and there were concerns about landscaping and lighting.

Guardino said changes were made in the site plans and it was approved by the zoning board.

He said the developers are proposing to plant 14-foot evergreens, and build a 4-to-5-foot retaining wall topped by a 6-to-7-foot fence as a buffer between the building parking lot and the adjacent resident’s property.

“That would block any lights or headlights,” Guardino said.

He added that they are also choosing to use LED lighting to further limit the impact on   residents.

Flower Hill resident John Karey, who shares a property line with the site, requested that the developers build a higher wall, and another neighbor favored that approach, also.

“Why can’t the retaining wall for my neighbor who sits higher than I, and for us for safety, sound, aesthetics, start at 15 feet?”

Karey said that he wants to see one structure in lieu of multiple walls and fences.

Village Engineer Stephen Lawniczak said at the meeting that the developers cannot build a 15-foot concrete wall, due to the landscape.

Village Mayor Elaine Phillips said a two-foot retaining wall and 13 feet of fencing might be the best option.

“I love that idea just for safety reasons,” she said. “What’s wrong with that? Nothing.”

The village board said the board would continue to work with the developer on the proposal.

Phillips said board members will go to the property to see what would be the best option for developers that would also meet the resident’s need.

Also at the meeting, the board passed a law amending the administrative code to allow the village to use a “best value” analysis when awarding contract bids.

The law states, “The Village of Flower Hill may award contracts for certain goods and services on the basis of a best value offer as an alternative to awarding such contracts to the lowest responsible bidder.”

“This will allow the village to be able to award contracts on best value rather than lower price,” Village Clerk Ronnie Shatzkamer said.