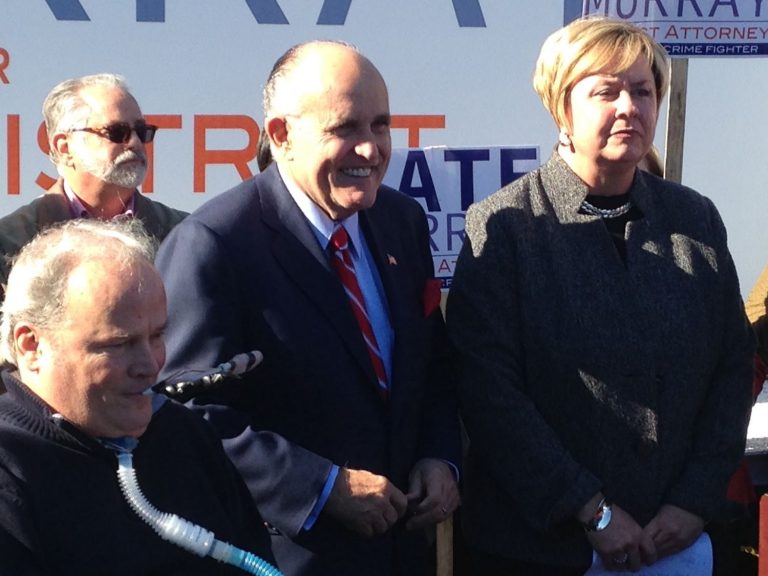 Republican Kate Murray ended a week of duels with her Democratic opponent Madeline Singas with a public endorsement from former New York City Mayor Rudy Giuliani, a prominent figure in her party.

“Kate Murray, unlike her opponent, will intervene … on behalf of keeping you safe, as opposed to just sitting back and letting things happen, the way her opponent will do,” Giuliani said.

Singas has repeatedly denied Murray’s accusation that she directs prosecutors not to weight in on cases where drug defendants could be sent to treatment programs rather than jail.

Attorneys object to diversion when a case merits it, she has said, but judges often send defendants into treatment anyway.

“I could scream and jump on one foot until I’m blue in the face (when objecting to diversion), and it won’t work,” Singas said Wdnesday night during a debate at Hofstra University.

But Murray said she would do just that as DA.

Giuliani, who appeared in a Murray campaign ad earlier this week, also tried to quell critics of his endorsement as hypocritical, such as the New York Daily News and the Singas campaign.

At an Oct. 6 fundraiser for Republican Joan Illuzi’s bid for Staten Island’s DA seat, Giuliani said the candidacy of her Democratic opponent Michael McMahon, a former New York City councilman and congressman, was “disgraceful” because he has no experience as a prosecutor.

Singas has made similar criticisms of Murray, who has a law degree and worked as an assistant state attorney general but has not practiced criminal law.

Giuliani said a district attorney should have criminal experience in most cases, but Singas’ record as a prosecutor indicates she would not be tough or effective enough as DA.

The DA’s job isn’t so much to try cases in court, he said, but to lead and manage the office.

“Some of your best prosecutors have been great administrators and not necessarily had prosecutorial experience,” said Giuliani, who was the U.S. attorney for the Southern District of New York from 1981 to 1983.

Murray said a recent settlement between police and a confidential informant whom a cop outed in court shows Singas lacks sound leadership skills.

As Newsday reported Friday, the informant sued police after a prosecutor prompted an officer to identify him during testimony in a murder trial in 2010.

But Singas did not take the helm of the DA’s office until Januray, and in 2010 was still head of the county’s Special Victim’s bureau, which had nothing to do with the case.

Albert Teichman, Singas’ chief assistant, said the office was not a party to the lawsuit, which was filed in 2012.

Murray also got backing from NuHealth, the public benefit corporation in charge of Nassau University Medical Center, on Tuesday in a release from President Victor Politi and board Chair Michael Mirotznik.

But NuHealth retracted the release a day later following criticism that a corporation funded by tax dollars should not be taking sides in political campaigns, Newsday reported Wednesday.

NuHealth did not collectively authorize the endorsement release and “its contents were not the opinion of NUMC but rather was the opinion of a board member in his individual capacity,” the retraction read.

Schumer, who has advocated for gun reform in Congress, said Singas’ experience and leadership skills qualify her for the job.

“She has worked tirelessly to combat gun violence, fight government corruption and keep our communities safe,” he said in a statement.