Home News Seniors shake it, to keep it 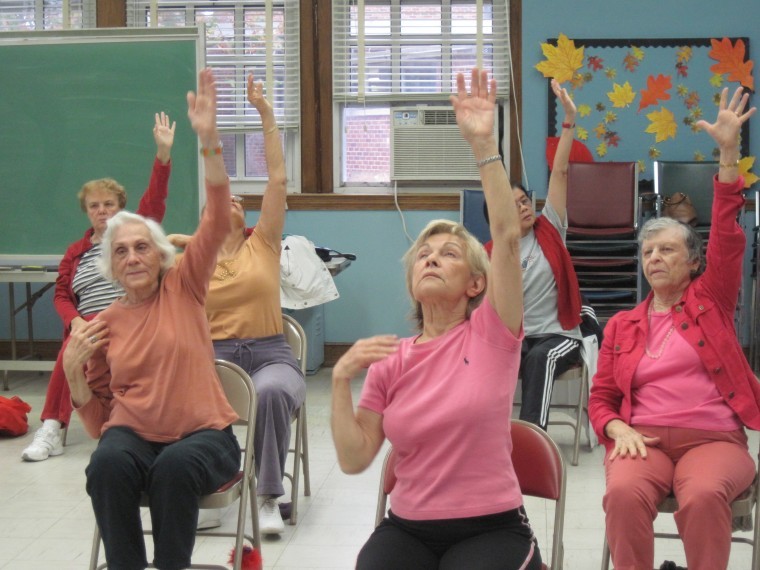 On one recent Friday morning, a group of 30 elderly women are seated in chairs in a room at the Herricks Community Center, raising their arms and stretching to the accompaniment of Elvis Presley singing “All Shook Up.”

When they were done, they joined other senior citizens from the area in the cafeteria just down the hall as part of the seniors nutrition program.

The exercising and the nutrition programs are part of a full schedule of activities for Herricks Seniors Citizens, Inc. that includes a weekly gathering each Wednesday, and various classes and outings for a community organization that is observing its 45th anniversary this year.

“It’s a social senior group,” said Ann Forster, Herricks Seniors coordinator. She said the group’s general objective is “getting them out of the house and into a social environment where they meet people.

What happens when they get older is that they don’t want to meet new people.”

The 64 active members of the group, who mostly come from New Hyde Park and Albertson, pay $1 a week in dues, according to Forster. The weekly Wednesday gathering comprises a variety of activities – last Wednesday they held a Halloween costume contest and live musical entertainment – but most of the members gravitate to playing card games. The group also invites speakers once monthly to their Wednesday gathering.

The group’s outings also are scheduled for Wednesdays. Forster said the next trip will be a tour of the Cathedral of the Incarnation in Garden City in the first week in December with Village of Garden City historian John Kordes as guide through what is reputedly the smallest Gothic cathedral in the world. The group will have lunch at the bar association headquarters afterwards.

The group annually attends the Hick’s Flower Show in March, followed by a luncheon lunch

The county funds an aerobics class on Tuesday mornings and a yoga class and a painting class on Tuesday afternoons, and line dancing on Mondays, according to Forster, who also serves as head of the Herricks Nutrition Group and East Williston AARP.

The nutrition group, which serves lunch for the seniors on Monday, Tuesday and Friday also is funded by the county.

Exercise classes on Wednesday and Friday are funded by the school district.

The group also has special luncheons to observe its anniversary – they just celebrated two weeks ago at the Pompeii Restaurant in Hempstead – and also holds annual Christmas and end of summer luncheons, according to Forster, who started coming to keep in shape, but discovered a new social outlet in the process.

“When I retired, I came to Herricks for their exercise programs,” Foster said. “I didn’t know anybody when I came here. I’ve met so many friends and met so many people. It’s wonderful.”