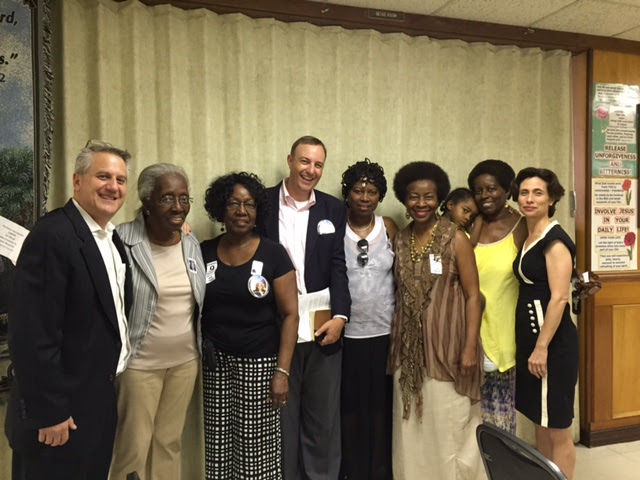 Three months after visiting Emanuel African Methodist Episcopal Church in Charleston, S.C., where nine people were shot and killed during Bible study on June 17, Rabbis Meir and Tara Feldman will open the doors to Temple Beth-El of Great Neck for the family of Myra Thompson, one of the congregants killed during the shooting.

Temple Beth-El will hold services on Nov. 6 at 7 p.m. and Nov. 7 at 10 a.m. to pray and bring the community together with Thompson’s visiting family.

“We have so much to learn from our Charleston brothers and sisters,” Meir said during a Yom Kippur sermon. “I am not exaggerating when I say to you that I would be a better rabbi, a better Jew and a better human being, if I spent some months praying with them, davvening in their shul, learning their Torah.”

The Feldmans said they went down to Charleston July 1, before returning the next day, to help the families of the nine congregants grieve.

“Our primary goal and intention was to do what Jews do; when someone suffers a loss we go and visit the family and sit and listen to stories of their loved ones,” Meir said.

The Feldmans were invited to join the community for the 6 p.m. Wednesday evening bible study, the same class at which the shooting occurred only two weeks prior.

While at the Bible study, the Feldmans said, they met many family members of the nine slain church members, including some of Thompson’s sisters.

Since their visit, the Feldmans have remained in contact with Blondelle Gadsden, one of Thompson’s eldest sisters, who told them in early October she hoped to bring her sisters to Great Neck.

Temple Beth-El, Tara said, has a Torah study every Saturday — similar to the Bible study that takes place every Wednesday at the Emanuel AME.

“It felt very much like it could have been us,” Tara said. “We make those sacred texts relevant in our lives, to make ourselves better too, and even though some of the texts may be different and our metaphors for God are a little different, in that way we felt a bond with them.”