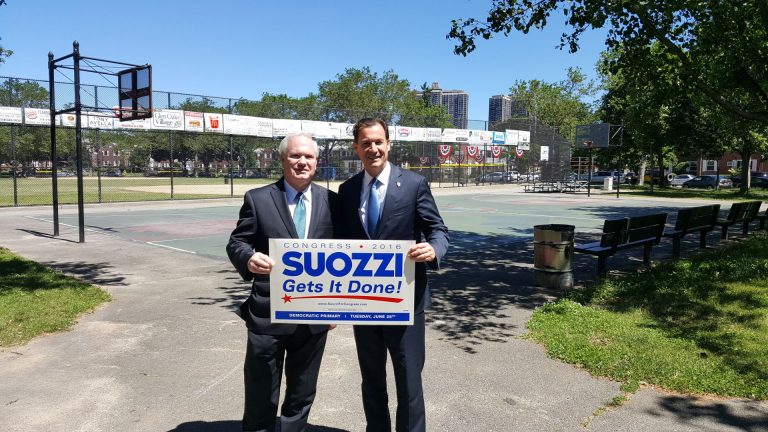 Avella said at a press conference at the Glen Oaks Oval in Glen Oaks that he thought Suozzi would be most capable of working with him to ensure the quality of life of residents in the 3rd Congressional District at the federal level.

“Sometimes you hate to say how far you go back, but I’ve known him for several decades. I know the great work he’s done,” he said. “I know Tom will work with me to deal with some of the local issues that relate to federal legislation.”

“This is a big deal for me today to get the endorsement of Sen. Avella because the senator has a reputation for being a reformer, somebody who is willing to stand up and fight for the things he thinks is right no matter what the political consequences are,” Suozzi said. “I hope that his endorsement will communicate to the people of Queens and the people of his district that I’m that type of person as well.”

He is one of five candidates vying for the Democratic nomination to replace outgoing U.S. Rep. Steve Israel, who announced in January that he would not seek re-election.

Suozzi said he was “trying hard to be the Queens candidate” and represent its residents as best he can.

He also pledged to open a district office in Queens if he is elected.

Of the issues facing Queens constituents of the 3rd Congressional District, Suozzi said he would fight against airplane noise and issues with co-operative apartments and condominiums.

“As much as people think of it as a local issue and a state issue, you can’t refinance the mortgages on co-ops and condos because at the federal level they’re considered to be commercial mortgages, which is absolutely absurd that they can’t get their interest rate reduced based upon the current market place,” he said.

The Democratic primary election is set for June 28.