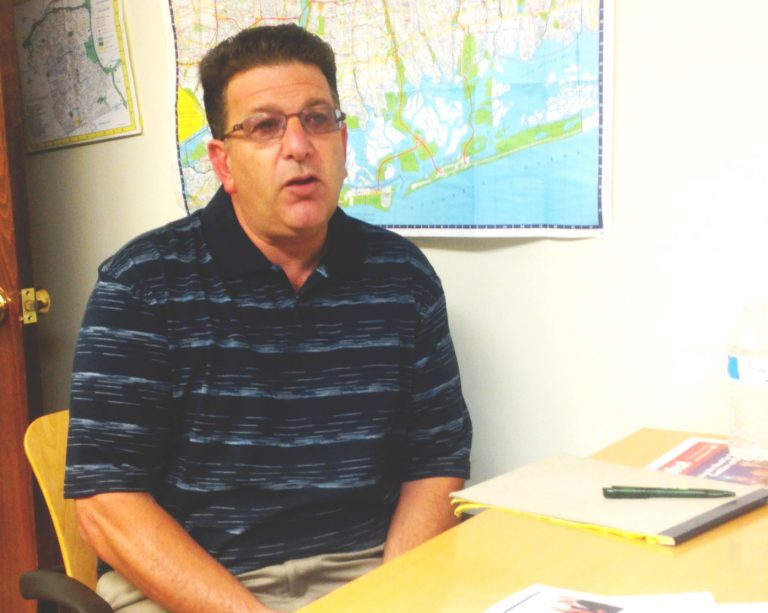 Unlike his Republican opponent in the race for the Ninth District seat in the Nassau County Legislature, Mal Nathan has no experience running for political office.

Nathan, a resident of Williston Park who patrols Manhasset Bay as the Town of North Hempstead’s chief bay constable, has volunteered with several local Democratic campaigns.

But that is the extent of his political experience.

So, he said, he knows he has an “uphill battle” against Republican incumbent Richard Nicolello, who has served in the Legislature since its inception in 1996 and holds the No. 2 position there as deputy presiding officer.

But, Nathan said, his blue-collar background makes him a “man of the people” and a strong choice for Nassau County Democrats.

In a sit-down interview with Blank Slate Media, Nathan criticized the county government for privatizing several public services, such as the sewer district, bus services and the county attorney’s office.

To Nathan, the practice, which Republicans say saves the county money, is “giving away (county) infrastructure.”

It creates openings for cronyism and makes the services less reliable and accountable to county residents, he said.

“If your sewer starts to back up in your neighborhood, you think you’re going to get anybody at United Water to answer your call?” Nathan said. “At least you have a legislator, you have somebody in your district who represents you. If it’s a county-owned and -run infrastructure, you’re going to get answers.”

For example, he said, the Nassau Inter-County Express’s recent decision to cut nine bus routes makes it harder for people who cannot afford a car to get where they need to go.

Nathan also called for greater transparency when it comes to the county’s contracts. In his experience as North Hempstead’s bay constable, he  said, he has found that towns in Suffolk County have made all their contracts with private companies public on their websites. Nassau County should do the same, he said.

Nathan also said he thinks contracts should come under more scrutiny on the front end of the process. He questioned the county rule that only requires the Legislature to vote on contracts worth $25,000 or more.

“Maybe these thresholds for dollar amounts need to start at zero,” he said. “Maybe everything needs to be looked at.”

Nathan said he has much respect for Nicolello, but said he is “voting with the group” on contracts and other budgetary issues.

Nicolello’s campaign website touts his support for the “public-private partnerships.” The NICE bus services save the county $33 million each year, it says, and another contract for prison health care services saves another $8 million.

Nicolello has the upper hand financially in the race.

The most recent available state campaign finance filings show Citizens for Nicolello, a political action committee affiliated with him, had $12,135.12 in its war chest in July.

Nathan, on the other hand, said he has raised about $2,000 over the course of its campaign.

The legislative district also has more active Republican voters than Democrats — 18,448 versus 15,683, according to the most recent available data from the Nassau County Board of Elections.

While the county Democratic Party has not given him any extra money, Nathan said, it has provided staff to help with the campaign.

Though he knows his chances of victory are slim, Nathan said conversations with voters have reaffirmed that his campaign is important.

Many have not known about the county’s financial issues, he said, and they are “astonished” when they find out.

“Sometimes you can’t blame people for not wanting to read the horrible news about the county’s budget, so it’s easier to ignore,” he said. “But we can’t ignore it anymore.”