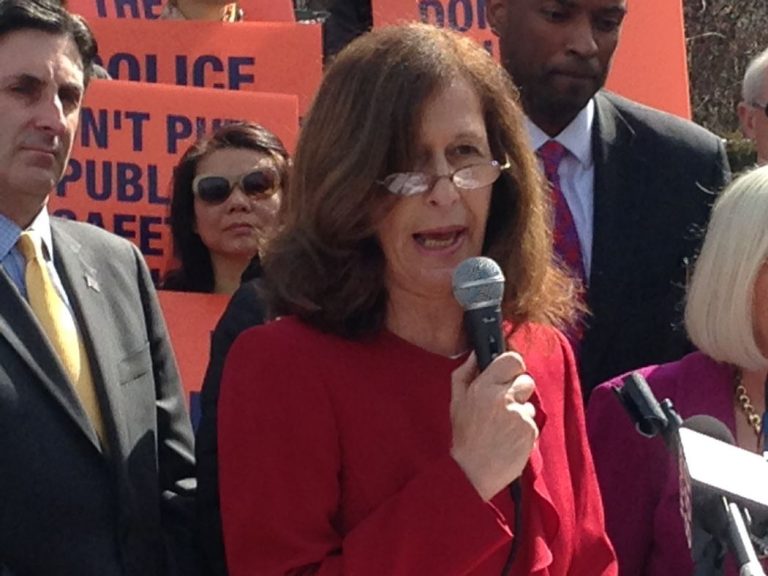 Joined by the heads of three police unions at the Sixth Precinct’s building in Manhasset, supporters of reopening the precinct echoed the concerns they raised last year that its 2012 merger with the Third Precinct reduced services without the cost savings promised to residents.

The calls follow reports this week of a 28-percent increase in residential burglaries compared to the same period last year, and the Nassau County Police Department’s formation of a task force to address the crimes.

“It’s not that I’m here to say ‘I told you so,’ but simply, ‘This was a bad idea,’” said North Hempstead Town Supervisor Judi Bosworth, who opposed the merger in 2012.

The Sixth Precinct merged with the Third Precinct in Williston Park under a countywide cost-saving plan proposed by County Executive Edward Mangano and passed in a party-line vote by Republican Legislators.

The Third Precinct was then split into two divisions — the Third South Subdivision and Third North Subdivision, which covers Manhasset, Great Neck and parts of Port Washington.

The Sixth Precinct has stayed open as a “community policing center” and Nassau’s Highway Patrol headquarters.

But the Third Precinct, stretching from Manorhaven to Nassau University Medical Center on Hempstead Turnpike, is too large to provide the same responsive service and feeling of security a local precinct could, county Legislator Ellen Birnbaum (D-Great Neck) said.

“This precinct should not be out of sight, out of mind,” Birnbaum said.

Additionally, officers at the community policing center are often too overworked to effectively respond to residents concerns, said Sue Auriemma of the Council of Greater Manhasset Civic Associations.

Because of county budgetary constraints, reopening the precinct would reassign officers from operational law-enforcement roles to administrative ones, police spokesman Det. Lt. Richard LeBrun said in a statement Wednesday.

“This would compromise public safety which (Acting Police Commissioner Thomas Krumpter) will not do,” LeBrun said.

The police department has also maintained the 177 patrol cars in the sector it deployed before the merger, LeBrun said. He added that crime has decreased 25 percent county-wide in the last six years.

The umbrella group of Manhasset civic associations first called for the Sixth Precinct’s return merger in a December letter to Blank Slate Media.

Bosworth called on county officials to undo the merger in a Dec. 24 letter to Mangano and other county officials, citing increased threats to public safety and previous changes to county precinct plans.

Since then, Nassau’s police department announced it has reinstated 16 problem-oriented police, or POP, officers tasked with responding directly to residents’ concerns. Four POP officers are assigned to the Third Precinct, with two each in the North and South Subdivisions.

Krumpter suspended the program in 2014 due to budgetary constraints, and residents had consistently pushed for its return since then, a police spokesman said.

While the POP officers’ return and the recently formed burglary task force are “steps in the right direction,” Birnbaum said, having a dedicated police force would return a feeling of security to communities in the north subdivision.

“I think the police are doing a great job to protect our community, but there’s more that could be done, and we’d love to see a fully staffed Sixth Precinct,” Birnbaum said.