Home News Unopposed, but not unengaged in GN 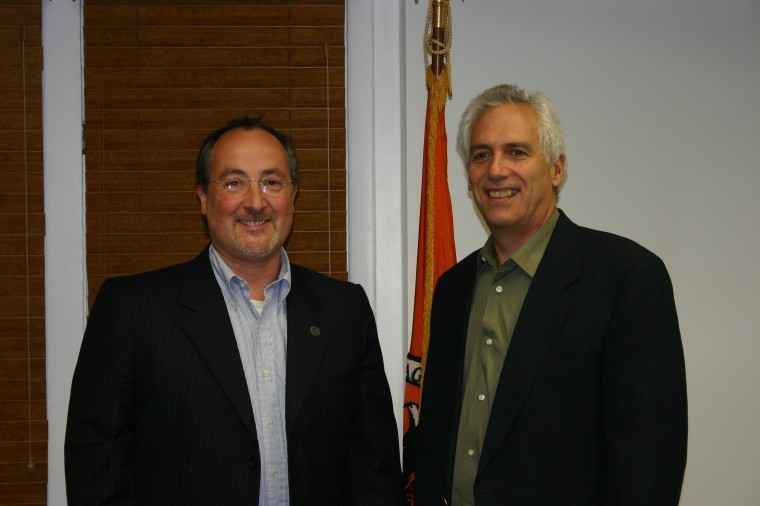 But for Birnbaum and Sobel, who are running for re-election in this month’s uncontested village election, the pair said they can agree that such discord has provided dividends for Great Neck’s residents.

“It’s not a robotic board,” Sobel said on Monday. “It’s very much five individuals, but it’s five individuals who share a vision to better the village. We happen to all, I think, get along very well despite the fact that we sometimes disagree.”

The uncontested Village of Great Neck election will be held on Tuesday, June 19 from 12 until 9 p.m. at the Great Neck House on 14 Arrandale Avenue.

With the board set to retain its current configuration for at least another year, Birnbaum said he views the prospect of serving his sixth term as a Village of Great Neck trustee as both gratifying and challenging.

“Often times we don’t agree, and that’s true in public session, as well as executive session,” Birnbaum said. “Nobody questions what the motivation is even though I don’t agree with the members of the board sometimes.”

“It’s important,” he added, “to have people that can work together and respect each other.”

In addition to serving as trustee for the past 10 years, Birnbaum was the former chairman of the Village of Great Neck Board of Zoning Appeals. He also previously served as a member of the village’s housing authority for 20 years.

“I have the longest history involved in the village of any of our currently elected trustees or the mayor,” Birnbaum said.

An attorney, who has practiced for the past 35 years, Birnbaum currently operates a private law firm on Cutter Mill Road.

Along with his service to the village, Birnbaum currently works in a voluntary capacity as counsel to the Great Neck Chamber of Commerce. He is also a former vice president and first vice president of Temple Israel of Great Neck, who has served on a number of the synagogue’s committees.

“I don’t take anything for granted,” Birnbaum said. “I hope that the public believes that I’ve done a good job.”

Birnbaum, who is the Village of Great Neck’s public safety commissioner and police commissioner, said a majority of his work as trustee has been dedicated toward serving as a liaison between the board and Nassau County Police Department’s 6th Precinct.

“I’m the person that is responsible for dealing on a day-to-day basis with the police and interacting on all police matters,” Birnbaum said. “That has become important in dealing with traffic safety. It tells the precinct that there is someone there. There is someone who is responsible for the village. We’ve been able to get a little more attention than we otherwise would have.”

Work the current board of trustees has done to revitalize areas along Middle Neck and Steamboat roads in the village through new zoning initiatives have also been rewarding, Birnbaum said.

The new zoning has helped create safer traffic patterns for motorists and pedestrians, as well as assisting the village’s business leaders to increase business, Birnbaum said.

“I think that’s been very, very important, the rezoning,” he said, “which is unfortunately a slow, painstaking process.”

Birnbaum said he was also influential in keeping the village’s budget in check and its property taxes at a reasonable level. He said he is known as the “fiscal conservative” on the village’s board of trustees.

“I watch every nickle that is spent and question it,” Birnbaum said. “We spend hours and hours debating and discussing even a relatively small expenditure. We treat all the dollars as if it’s our own.”

“We are the taxpayers,” he added. “We are the residents, as well as the ones that are in charge.”

During his next term, Birnbaum said he will continue to work with the county police department during its transition to make the 6th Precinct a “community policing center.”

Due to Nassau County Executive Edward Mangano’s reorganization plan, four of Nassau’s eight county police departments are being made into “community policing centers.”

“We are faced with a lot of indecision with regard to the closing of the 6th Precinct at the end of this month,” Birnbaum said. “I’m going to try to put as much pressure as possible … to make sure that we don’t have less of a police presence or attention from the police.”

While Birnbaum may be one of the longest-tenured members of the village’s board of trustees, Sobel is running for his second term.

Over the past two years, Sobel said he has gained experience that is “very interesting” and “rewarding.”

“There’s definitely a learning curve,” he said of serving as trustee. “When you first start out, you want to do a lot more listening than talking and see how the process works. It takes a little bit before you find your voice.”

Although Sobel is relatively new the village’s board of trustees, he has served the local community in a variety of other capacities.

Before becoming a trustee in 2010, Sobel served for four years on the Village of Great Neck’s planning board. He is currently the board of trustee’s liaison to the planning board.

Sobel is a six-year member of the Great Neck Park District’s advisory committee for the children’s play garden at the Village Green. He also served a three-year term on the Great Neck Library’s nominating committee.

A graduate of  Brooklyn College with a major in accounting, Sobel also earned a law degree from Yeshiva University’s Benjamin N. Cardozo School of Law. He has operated a private law practice in Great Neck for the past 23 years.

“Working on the budget has been an education for me,” Sobel said of his time as trustee. “I graduated with an accounting degree, but I haven’t had much of an opportunity to use it.”

“You have to kind of thing a generation down the road, when those roads are going to have to be replaced again and how the village is going to handle it at that time,” Sobel said.

Helping to continue Great Neck’s “Old Village, New Main Street” project to revitalize Middle Neck Road is something Sobel said he looks to again take part in over his next two-year term as trustee.

“The improvements have been really up and coming, whether it be signage or what (Village of Great Neck Deputy Mayor) Mitch (Beckerman) has done with the planters in the middle of the road. I enjoy the fact that we are planting trees all over the place and greening up the village.”

Sobel said the success of the “Old Village, New Main Street” project is vital to the future of Great Neck.

“Ultimately if we put new zoning in place, we can optimize our main street, our new Middle Neck Road … to be on par with some of the other main streets around us,” Sobel said.