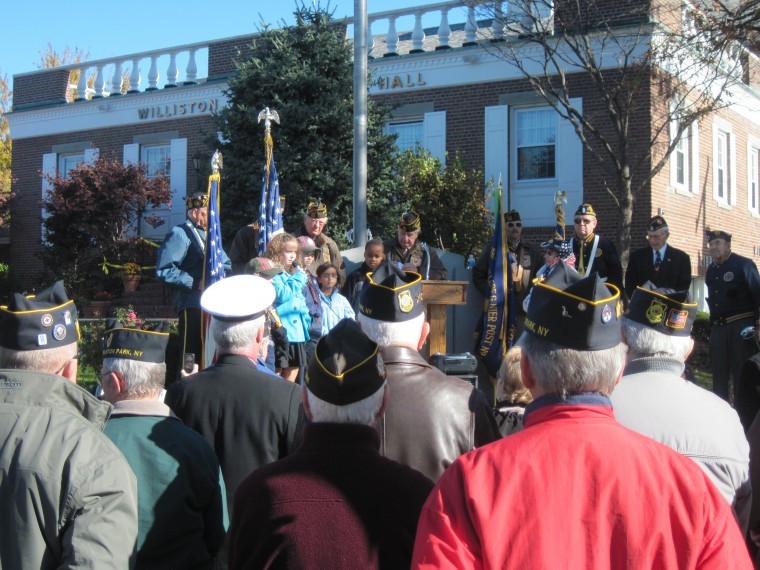 Whether at peace or at war in America, solemn pride reins on Veterans Day.

Locally, those same reflections of the sacrifices of those who have served were carried forward to new generations on Nov. 11.

Attending his first veterans’ event in uniform as a new member of the Cub Scouts, 6-year-old Dillon Silva clearly understood the message of more than 90 years.

“Veterans Day is about the soldiers because they fight for us,” said Silva, of East Williston Pack 8.

Standing at the monuments dedicated to the townspeople and villagers who have served in wars past, armistice was recognized by more than a hundred residents who attended two separate services – although the fight rages on for U.S. troops abroad.

In 1918, a temporary cessation of hostilities went into effect between the Allied powers and Germany during WWI on the eleventh hour of the eleventh day of the eleventh month. The first ceremony of the day commemorated the event at precisely the same time.

Through speech, tribute and prayer, Chaplain Joseph Dellaquila and Commander Charles Boyd of the local chapter the Veterans of Foreign Wars officiated on the Williston Park Village Hall front lawn.

With traffic being halted by police, renditions of “God Bless America” and “Taps ” was played and bells rang out from a nearby tower. Veterans, local officials and townspeople gathered at the corner of Willis Avenue and Meagher Place for the ceremony highlighted with a speech by former Williston Mayor Roger Fay.

Fay, 93, recited a brief history of Armistice Day, which is generally regarded as the end of the First World War. In 1919, Pres. Woodrow Wilson proclaimed the first commemoration of Armistice Day in the U.S. In 1954, Congress officially changed the name to Veteran’s Day to honor American veterans of all wars.

“These solemn services are a tribute to you,” said Boyd,” a Korean War veteran. The former U.S. Marine sergeant also gave a silent tribute to fallen comrades.

Following the brief ceremony, the group moved to East Williston for a similar tribute at the war memorial on the village green.

At each ceremony, a group of award-winning Cross Street School students recited “In Flanders Fields.” The 1915 Canadian poem has become a symbol of Remembrance Day worldwide.

“We ask that you bless our veteran’s today and in the hereafter,” said Rev. Thomas Tassone of the Church of St. Aidan, who also sang the “Star Spangled Banner” on the green.

Using the event as a “teaching point” for younger generations, U.S. Navy Reserve Cmdr. Bill Kempner encouraged East Williston children to give thanks to those who serve.

“Veteran’s are people who wrote a check with their name on it,” said Kempner, a Navy veteran since 1972. “When you see a man in uniform like me, go up to them shake hands and say thank you.”

“Remember them everyday for what they have done,” said East Williston Mayor Nancy Zolezzi while thanking military veterans and event volunteers during the second ceremony.

U.S. Army veteran Jim Mason of Bellerose, N.Y., said he was happy with the turnout. “It’s nice to see everybody out here for the holiday,” said Mason, who served in Korea from 1951-53.

Other local attendees included representatives from various veterans’ organizations, elected officials and dozens of Boy Scouts, Webelos and Cub Scouts who helped out with the ceremonies.