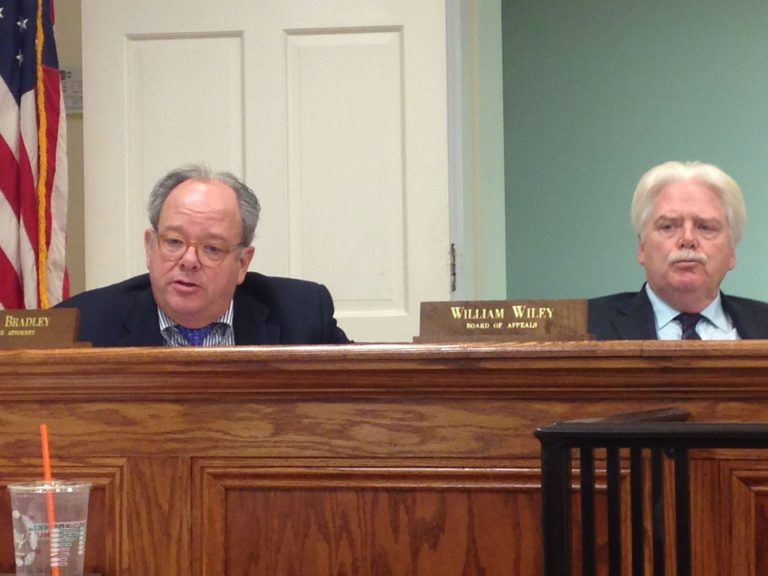 After a third contentious public hearing, Williston Park’s Zoning Board of Appeals on Monday denied dentist Joseph Locurto’s application to replace his office with a two-story mixed-use building.

The decision was a win for residents concerned the proposed building, which would have had Locurto’s office on the ground floor and one apartment above it, put the village on a slippery slope that would exacerbate parking and traffic problems on Willis Avenue.

It also extended Locurto’s wait to rebuild his dental practice at 623 Willis Ave. after a July 2014 fire destroyed it and five other neighboring businesses.

“I can’t say I’m surprised with the way things (have) gone, but I think, to be honest, the whole proceeding was a joke,” Locurto said in an interview.

The zoning board voted 4-1 to deny the project, with Chairman Brian Cunningham casting the sole vote against its rejection.

Locurto said he will now file an application to rebuild his one-story dentist’s office as it stood before the fire, which Building Inspector Kerry Collins said his department would approve.

Opponents to the project said at three public hearings that a building taller than one story would have changed the village’s suburban character.

It would have also set a precedent, they said, for the other business owners to build similar larger structures with added apartments, causing an influx of new residents and cars the downtown area’s narrow, crowded streets could not handle.

“It’s really Grand Central Station of Williston Park, and it’s too small,” resident Patricia Lennon said Monday. “It will change the character of the area, and it just wasn’t built for this kind of traffic and heavy-duty use.”

Locurto’s original plan was for a three-story building with three apartments above his office, but he removed the top floor after residents first aired these concerns at a September hearing.

His attorney, Michael Holland, repeatedly said the proposed apartment would have only housed one family. The zoning board could not reject Locurto’s proposal based on the possibility that others like it would follow, he said.

Holland also argued the building would not have caused a “dramatic change” in the area’s character because there are several other multi-story structures nearby, including a three-story building next door to Locurto’s property.

“How can someone come in here and say one lousy apartment is going to impact this village to the point where we’ll tell Dr. Locurto, ‘Your apartment building is going to cause the most massive traffic jam we’ve ever seen in the history of the village?’” Holland said.

The project also got 13 letters of support from Locurto’s patients who live near the Willis Avenue business area, the dentist said.

But in the absence of any parking or traffic studies proving Holland’s points, the board was not convinced. It had questions about the project from the beginning and decided to table the decision in both September and October.

Board member Bill Wiley also presented building department data showing the board hadn’t approved a multiple-story building under modern zoning code since 1965. The three-story building Holland mentioned was built in 1932, and larger structures were built before the village’s incorporation.

“We’re looking to make a change to the village that hasn’t been made in 50 years in that area,” Wiley said.

Locurto submitted his first application in May and has been renting office space in Albertson since the fire. He said he was frustrated it took six months to get a final decision, as his current arrangement has been “physically, mentally, a tough situation to be in.”

His office will be the first business the fire destroyed to be rebuilt.

Locurto said three of the others decided not to rebuild or reopen in their former locations, and the other two moved.