Kathryn Canese, who is running for a spot on the New Hyde Park-Garden City Park Board of Education, said that if she is elected she will work on the pressing issue of school safety including more of a focus on mental health problems.

Her opponent, Dr. Sangeeta Nischal, said that she will work to increase the number of gifted and talented programs in school and after-school programs.

The two are among five candidates who have filed to run for three trustee seats on the school board.

Canese and Nischal will run against each other for Ernest Gentile’s vacant seat. Jennifer Kerrane will be running unopposed for her current position. Patricia Rudd is seeking re-election and will face Saadia Malik.

If elected, Canese said her goals are “very much in line with the goals that our current school board has adopted.” She said transparency between the community and the district as well as consistency with how children are being taught across all of the grade levels and schools are very important.

“Anytime you want to talk about school safety, you have to be aware of the mental health of students and staff,” she said. “I hope to bring a little more focus on that end of the spectrum.”

Nischal said if she is elected, she would also encourage more volunteering as well as improving the safety of students and continuing to foster respect and tolerance for other religions and cultures.

“Our community is becoming more and more diverse,” said Nischal. “We should always respect other people’s religions.”

Nischal said her goal is to become more inclusive in terms of the board’s current approach to education.

“We do not have a complete approach to education, and I think that’s very important for our district,” she said.

Canese spent two years as the co-president of the Hillside Grade School PTA. During that time, she said, her focus was on ensuring that everything would be to the benefit of the children, with an emphasis on improving the safety of the school. Canese said she also worked to bring in cultural arts and found a calling in advocacy issues.

This incident showed the board and PTA members that there can be chaos during an election when the school is left open to voters. During her two years as co-president, Canese said she brought new life to a petition that started a few years earlier not to allow schools to be polling places.

As a result of these efforts, Canese said polling was taken out of the schools in her district. She will go to Albany this week to lobby for legislation that would give superintendents the chance to opt out of using their schools as polling places across the state.

“I enjoy the advocacy issues and I feel like I will have even more opportunities to do that as a board member,” said Canese. “I really wanted to take another step further and be that much more involved.”

Nischal moved to the district in 2016 from Washington state. She is a doctor who focuses on cancer research and has two children attending New Hyde Park High schools. Nischal said that she has not served on a board, but has spent years volunteering at schools both in Washington and New Hyde Park.

“I’ve been a big advocate for education for children,” she said. “I’ve always been involved on how we can add and improve.”

Canese said her past experience serving on the board has given her exposure to certain processes and how things happen in the district. She said the board has not had a representative from Hillside Grade School for a long time, and she thinks that there “are some checks and balances put in place if you have representatives from the four grade schools.”

“I truly believe that my involvement within the school has set me up for this to be a pretty natural next step,” said Canese. “I’ve been involved in the PTA for about 11 years now. I want to see all of those kids and know that I did right by all of them.”

Nischal said that she would bring diversity to the board and increased enrichment for students.

“It’s good to see diversity on the board,” said Nischal. “It would reflect our community better.”

Kerrane is currently the president of the New Hyde Park-Garden City Park School District. She will be running unopposed for her spot on the board.

Kerrane first ran for a seat on the board in 2013. She has been a resident of New Hyde Park since 2004 and has three children. She used to be a member of the Manor Oaks School PTA and was an elementary school teacher for the New York City Board of Education.

Kerrane said she has worked with the board over the years to keep the budget at an acceptable level for taxpayers. The board has recently come under fire for issues with teacher contracts.

The teachers’ contract expired at the end of June 2018. Kerrane has said the board has been negotiating new contracts since October 2017.

Efforts to reach Kerrane were unavailing.

Rudd is currently a trustee. She is running for her current spot on the board against Malik.

Rudd was on the board for 15 years before taking a two-year hiatus in 2014 to move to Michigan for work. She also served as vice president of the board for one year. Rudd moved back and returned to the board in 2016 after defeating Shamini Sivalingam for an open seat.

Rudd previously said she worked in retail operations for cultural institutions, such as the American Museum of Natural History and Brooklyn Botanical Gardens.

Rudd has spent years lobbying for education in Washington and Albany and is a former member of the Nassau-Suffolk School Boards Association. She has said her passion is legislation and she believes that the federal government should give more control to the states over education.

Malik is a resident of New Hyde Park who has previously started an online petition that would increase the acceptance of other cultures within the school district. The petition calls for Eid al-Fitr and Eid al-Adha, Islamic holidays, to be added as school district holidays.

Efforts to reach Rudd and Malik were unavailing. 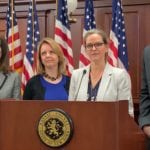