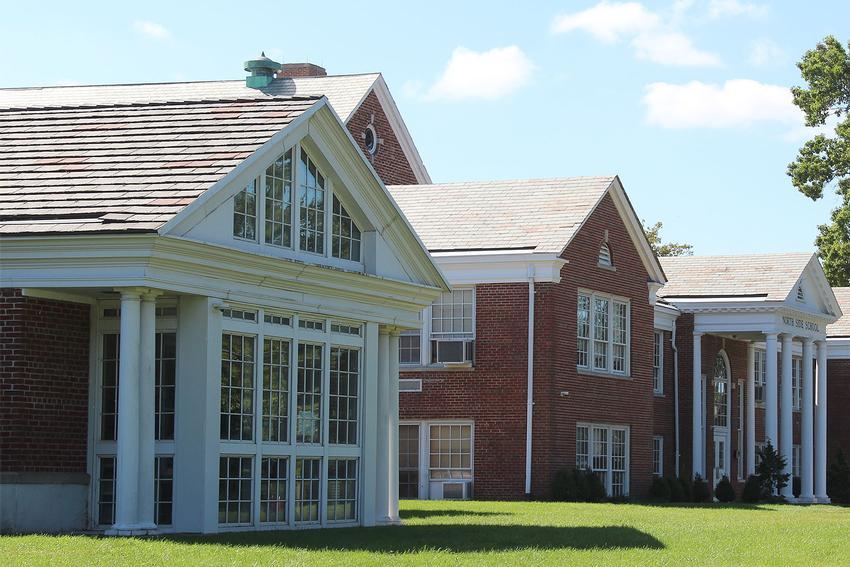 The North Side School is seen in East Williston. (Photo from ewsdonline.org)

East Williston residents are worried about a fence shutting them out of a local school’s back yard, but the school district says there’s nothing to fret about yet.

While East Williston school district officials have recently discussed the possibility of building a fence around a large lot behind the North Side School, “[t]here are no current plans” for one, Mark Kamberg, the district’s school board president, said.

The lot, stretching along Downing Street from Andrews Road to Wheatley Avenue, has baseball fields, a playground and basketball courts where families living nearby often bring their children to play, according to East Williston residents.

At Monday’s village Board of Trustees meeting, district residents said a fence would cut them off from a center of community activity that the neighborhood has used for years.

“Go there on any Saturday or Sunday, and you’ll see there are people playing ball, you’ll see families there, you’ll see a whole host of activities — soccer games, so on and so forth,” Phil Chappo, one of the residents, said. “Putting a fence up there would be inimical to the best interests of this community, because it is a resource.”

The school district, along with its parent-teacher organizations and security committee, has considered building a fence at the district’s sole elementary school for several years, Kamberg said.

Parents and others have suggested it as a way to keep kids playing in the lot from running into the street, prevent cars from riding up onto the grass and protect the school from intruders, Kamberg said.

But it is uncertain which goal the fence would serve and how it would be designed, he said.

The school district plans to hold a public forum in the fall to hear community feedback about whether a fence is necessary and what it might look like, Kamberg said.

“When we make decisions as a whole that affect our community, we ask for community involvement. We haven’t done that yet,” he said.

The fence has been a topic of discussion in the village for several weeks, residents and village officials said.

Village trustees have approached school district officials about the issue, but they have no jurisdiction over school property and could not stop a fence from being built, Mayor David Tanner said.

“My understanding is that there are several residents who want the fence,” Tanner said. “… So at that point for the board to take a formal position one way or the other is inappropriate.”

Residents asked the board to get more involved in the discussion and share any information with them.

Some said they thought the fence was sure to go ahead because there is money to pay for it in the school district’s new budget that takes effect July 1.

But Kamberg said that’s not the case. The district could use its regular budget or capital reserve funds to pay for the fence, he said, but that does not mean the district will build one any time soon.

District voters in May approved $1 million in capital reserve spending that will pay for various improvements at the North Side School, including fixes to the baseball fields and basketball courts, repairs to a security vestibule and new parking pavers along part of Downing Street.

If built, the fence would continue the district’s effort to boost security at its buildings, Kamberg said.

Notice of Formation of FORWARD ROOTS LLC.
Next Article