The Village of North Hills may be going green with LED bulbs after the Board of Trustees discussed an LED light conversion proposal at the monthly meeting last Wednesday.

The board held the meeting to set a hearing date for traffic regulations at North Hills Condominium II, discuss the implementation of new fiber optic antennas and address the possibility of converting all village light fixtures to LEDs.

Mayor Marvin Natiss addressed the benefits of adding LED bulbs, which would result in energy efficiency and reduced costs.

“In the long run, we’d be saving money,” Natiss said. “We’d capture the savings in three to five years.”

The cost of installation has yet to be determined, but Donald Alberto, the superintendent of the Building Department, said he expected it would be $15,000 to $20,000.

Village Attorney Thomas Levin said the LED conversion in North Hills cannot overlap with a similar project in the Town of North Hempstead, and the village will need to clarify if it qualifies to be placed on the Town of North Hempstead’s deal. The board voted in favor of a Request for Proposal, or a specific outline, for the LED conversion project.

A local law addressing traffic and parking near the High Point at North Hills Condominium II, in Roslyn Heights, is to be addressed at the next village board meeting on Sept. 26. The condominium is located off the expressway, where heavy traffic flows.

At the meeting there was also discussion about the North Hills bus shuttle, which runs from Village Hall to the Manhasset train station. The shuttle service, which is provided to residents without charge, has increased the number of trips. Natiss said the shuttle benefits commuters.

“It’s a fabulous service for our community, and a lot of young couples who still commute to Manhattan are grateful they have free transportation to the Manhasset station,” he said. 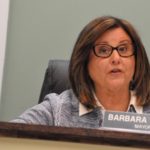