North Hills residents re-elected all four incumbent candidates Tuesday in an uncontested race that drew 135 people to the polls.

Though Reisman was an incumbent, it was the first time residents were able to vote for him. The mayor appointed him as village justice in December after his predecessor’s retirement.

Natiss, Sgambati and Cohen, on the other hand, had been elected multiple times. This will be Natiss’ fifth term and Cohen’s third. Sgambati was appointed to fill a vacant seat and has been re-elected five times since then.

“I’d like to thank all who came out to vote,” Cohen said in an email. “It’s an honor and privilege to continue to serve the Village Residents.”

The mayor and trustees named the village shuttle to the Manhasset train station as a favorite recent accomplishment.

Because of the service’s popularity, Natiss said he is looking into larger vehicles.

The Board of Trustees, with the help of a new park committee, is also working to enhance Lowell H. Kane Park with new fences, equipment and security cameras.

“I am grateful to our Village residents and appreciate the confidence they continue to show in our administration,” Natiss wrote in an email.

Turnout was similar to the village’s last election for two incumbent trustees who were both in uncontested races. It was smaller, however, than the last mayoral election, said village Clerk Marianne Lobaccaro. 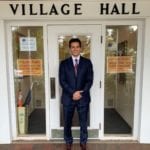 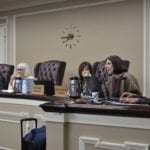