North Hills residents will head to Village Hall Tuesday to vote in a village election in which the mayor, deputy mayor, a trustee and the village justice are seeking four more years in office.

All four races are uncontested, and three of the candidates have served at least two terms in their current positions.

The ballot is as follows:

Natiss has been mayor of North Hills for 16 years. He is an attorney at Natiss & Gordon in Roslyn Heights, a general practice law firm of which he is a founding partner.

Sgambati has been a trustee for 18 years. He owns Island Taping Inc., a taping and spackling company that he said employs more than 150 people in New York City.

Cohen has been a trustee for eight years. She is an advertising production cost consultant and owned Storage 1-2-3, Inc. in New Hyde Park.

Reisman became village justice in December upon the retirement of Sigmund Semon. He is a founding partner of the firm Reisman Peirez Reisman & Capobianco.

Natiss, Sgambati and Cohen cited the creation of a shuttle to the train station as a point of pride and said they are looking forward to improving the village park in their upcoming term.

The shuttle to the Manhasset train station is popular among commuters who travel to Manhattan, and the village is looking into the possibility of getting larger shuttles, Natiss said.

“We know it’s a successful endeavor and we want to continue it,” he said.

The committee is also seeking to refurbish the basketball court and dismantle the handball court, a part of the park where people tend to smoke and drink, the deputy mayor said.

“Hopefully this will be a terrific upgrade for the village to Lowell Kane Park,” Cohen said.

Cohen was appointed to the board upon the death of her husband, Gerry Cohen, who was a trustee and died the day after he was re-elected in 2011. The couple had lived in the village since 1991.

“I had said to the mayor, ‘I know how much my husband loved the village and the people on the board and being able to contribute,’” Cohen said. “In their infinite wisdom they offered me the ability to be appointed and of course I accepted.”

Cohen said that since then, she feels she’s been an asset to the village board.

“Everybody works very hard and everyone’s just a pleasure, and it’s a well-oiled machine led by a mayor who’s been just fantastic,” Cohen said.

Natiss was the village justice for 10 years before becoming mayor. He is proud of having the lowest village tax in Nassau County, the shuttle service initiative and new developments like the Ritz-Carlton Residences.

“I love giving back to the community, I love the village, I love the residents and what I enjoy the most is that we accomplish a lot and it stays a premier residential community,” Natiss said.

Sgambati was on the Architectural Review Board, Zoning Board of Appeals and Planning Board before being appointed as a trustee.

He was an original owner of a condominium in The Gates, the village’s first condominium community, he said.

The mayor at the time, Lowell Kane, also lived in The Gates, and helped Sgambati become engaged with the village’s government.

Sgambati developed an affinity for service through local government, and he became the president of the North Hills Country Club as well as Estates at North Hills II, a community he later moved to in the village.

Voting will take place between noon and 9 p.m. on Tuesday.

An earlier version of this story said Cohen and her husband had lived in the village since 1999. They had lived there since 1991. 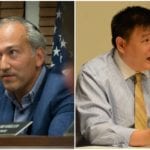 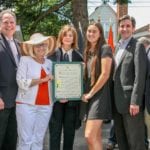