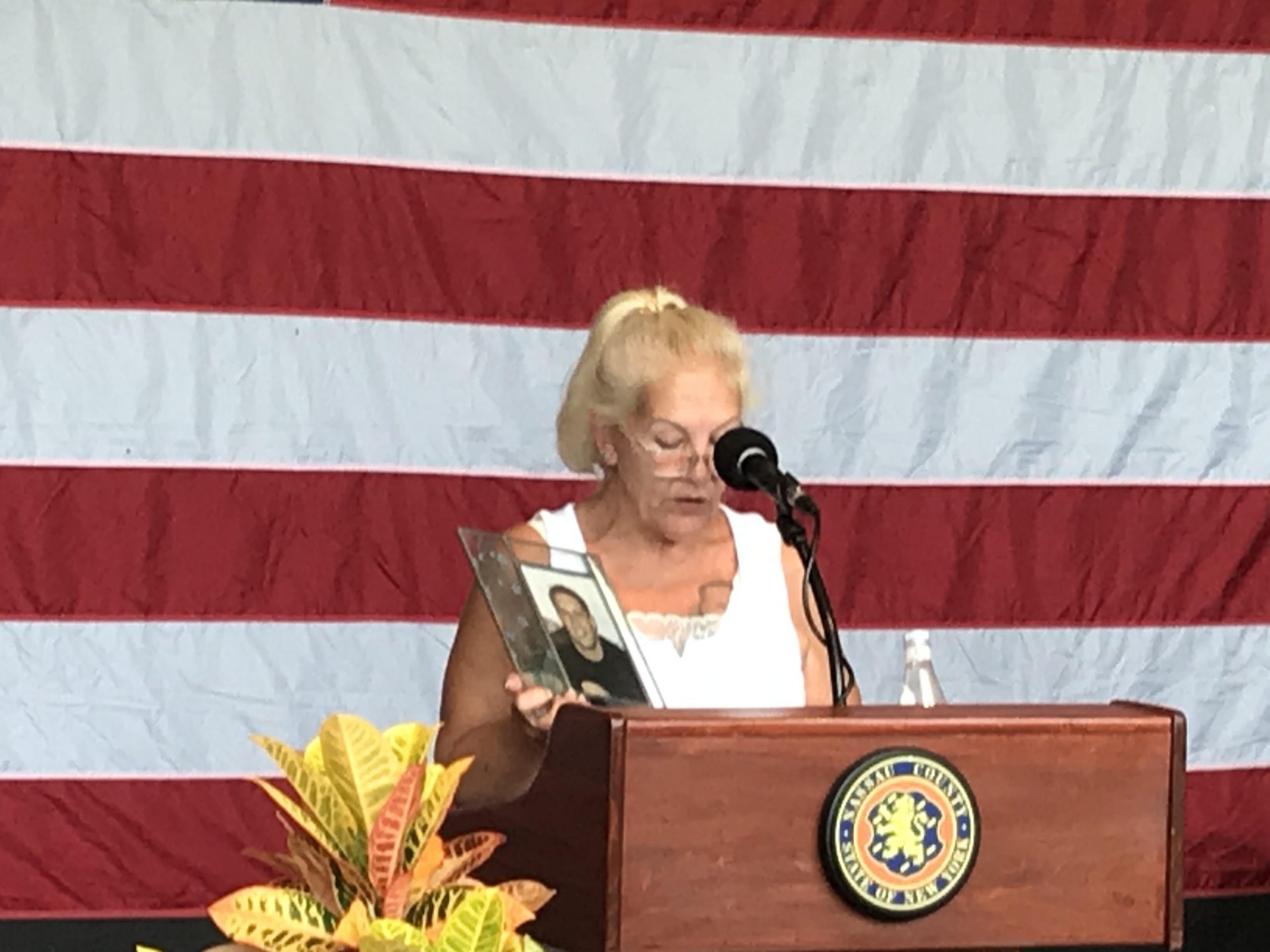 Sarah Hutchins holds a photo of her son who was lost in the Sept. 11 attacks 19 years ago. (Photo by Elliot Weld)

Nassau County and several villages gathered police officers, firefighters, religious leaders and survivors of the Sept. 11 terrorist attacks 19 years ago to hold annual commemorations of those lost, with social distancing in place.

Billy McClean, a resident of East Williston, was working as an operating engineer at the time and said he remembers the morning of Sept. 11, 2001, clearly. He spoke about his experiences that day at a village remembrance event held near the East Williston Village Hall Friday evening along with Mayor Bonnie Parente.

He described arriving to work on the subway and said it was a beautiful day. “Little did I know what was going to happen,” McClean said.

McClean was on the B4 level, four floors under the World Trade Center, working on  machinery when he heard a loud explosion and felt the building shake. He said ceilings began to come down and people began to run. McClean’s friend, whom he was working with, suggested they take the stairs to get out of the building. McClean went to pick up his tools and fell over. As he was picking up the tools, an explosion came from the elevator, which he said threw him eight feet across the room and through two sets of metal doors.

“I woke up next to my friend who already had a head start on me and my clothes were shredded, I had blood all over the place,” McClean said.

McClean’s friend led him up two flights of stairs, where emergency responders were waiting. He exited the building and asked a police officer what had happened. The officer responded, “a small plane had hit the building.” A short time later, he saw a plane hit the second tower. He and 15 other people packed into an ambulance and drove to a hospital.

A medical worker called McClean’s house every hour until finally getting through to his wife in the late afternoon to tell her he was alive. McClean said in a way, getting injured saved him. Several of his colleagues who were not injured went back into the towers to help evacuate people and died. McClean suffered extensive injuries but after rehabilitation was able to fully recover.

Parente said her three siblings were in the city on that day, and all three came home safely. Parente said she was one of the lucky ones, but five people from the village died in the attacks and more have been lost due to cancers and diseases associated with the attacks.

Michael Leccese played taps and Kaileigh Fiorello sang “God Bless America” for the crowd, which held up glow sticks to close out the event.

Williston Park’s event had to be abbreviated because of COVID-19 but it was attended by a few legislators such as state Assemblyman Ed Ra, state Sen. Anna Kaplan and Nassau County Legislature Presiding Officer Richard Nicollelo.

Mayor Paul Ehrbar said it was hard to believe that 19 years had passed since the attacks and that for those who are old enough to remember the visions of the attacks are “burned into our memories.”

To put the amount of time elapsed into perspective, Ehrbar pointed out that the average college freshman today was born in the year of the attacks and high school students were not yet born.

A crowd of about 40 people gathered outdoors at Kelleher Field to listen to speeches and prayers given by Ehrbar and others.

Mineola held its annual event at Mineola Memorial Park and featured a presentation of colors by the Mineola Fire Department Color Guard and the national anthem sung by Deborah DosSantos of Mineola High School.

The Town of North Hempstead hosted a virtual event in light of the COVID-19 pandemic. It was hosted by Town Clerk Wayne Wink and featured speeches from a number of elected officials and religious leaders. It was broadcast on the town’s television channel and on its website.

In the event, Wink referred to the physical distancing protocols that Americans are forced to adhere to and said the aftermath of the Sept. 11 attacks could be considered “the first new normal.”

He said many similarities exist between the two crises, such as the way people gather in large numbers, if they do at all, being called into question. He also brought up the fear people feel in their own communities and the first responders who put their lives on the line during Sept. 11 and during COVID-19.

“Families across North Hempstead were forever changed by the heartless events of 9/11,” Town Supervisor Judi Bosworth said. “The 56 victims  from our town were family members and loved ones, friends and co-workers and our neighbors.”

Nassau County held an event at Eisenhower Park in which the names of all those lost from the county were read by family members and friends.

“I know for those of you who lost loved ones on 9/11, life may have found a new normal but it feels a little off kilter,” Nassau County Executive Laura Curran said.

Curran said that in an era when turning on the television or social media results in seeing hatred and division, it is important that communities come together to mourn and pray.

One woman, Sarah Hutchins, who lost her son in the attacks, brought a photo of him and when she was done reading her set of names, said that every day since then, the struggle has gotten harder.

“The loss of a child changes you,” Hutchins said. “Time doesn’t heal all wounds.” 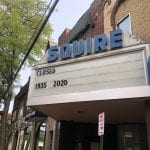 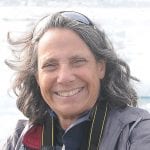 Viewpoint: Nassau must be fully counted in 2020 Census