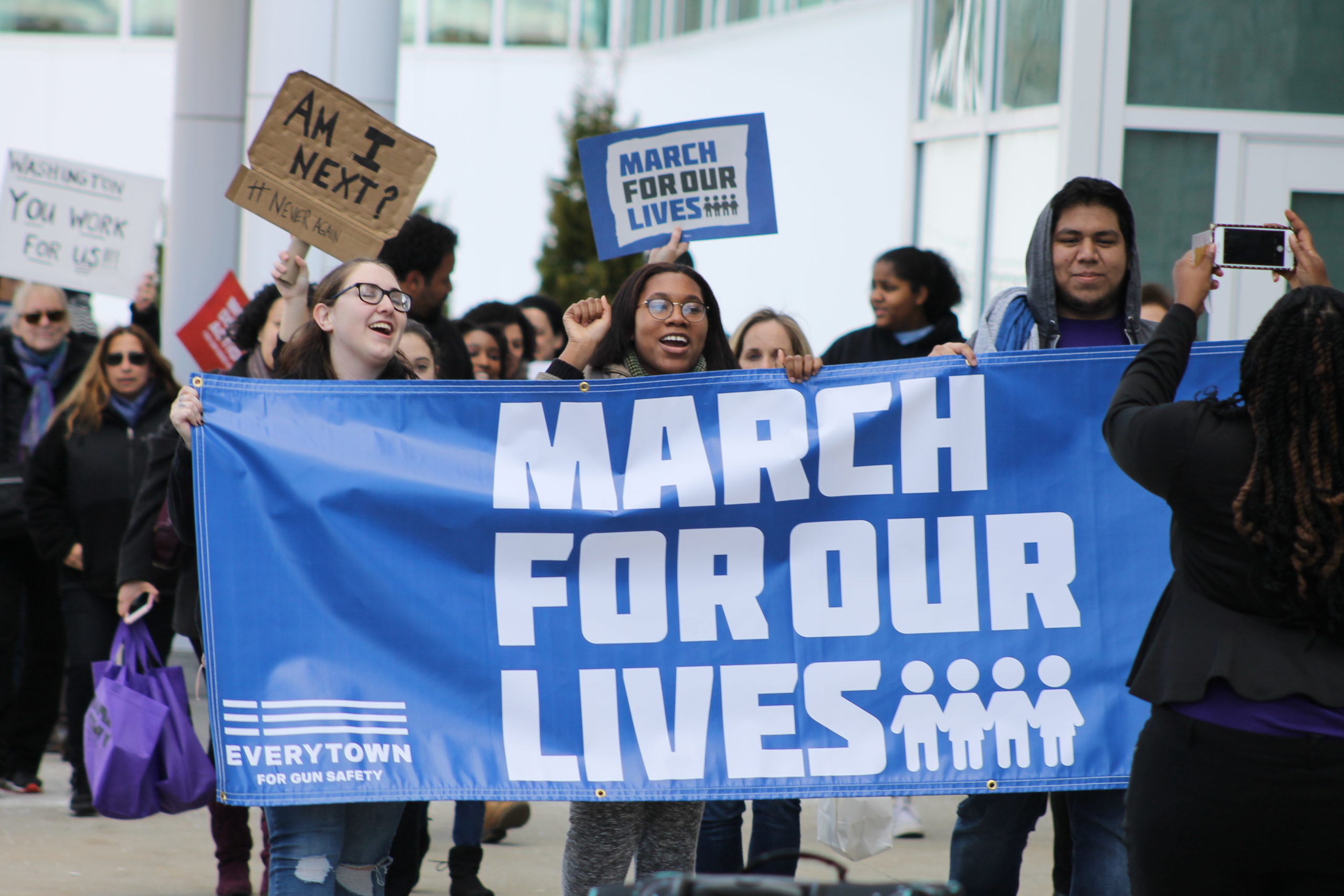 Hundreds of residents and students marched through the SUNY Old Westbury campus on Saturday to advocate for gun reform. (Photo by Amelia Camurati)

By Amelia Camurati and Janelle Clausen

Schreiber High School senior Nathan Abramowitz said during the Port Washington March for Our Lives rally on Saturday that he plans to register to vote when he turns 18 next week.

“For young voters like me, we need to make sure we vote,” Abramowitz said. “Historically, younger voters have disproportionately not shown up for midterm elections. We need to change that now. We cannot take out foot off the gas.”

Abramowitz and thousands of people across the North Shore rallied against gun violence and called on politicians to enact stronger legislation on Saturday, joining in solidarity with March for Our Lives demonstrations nationwide.

Among the speakers at the rallies were religious leaders, local politicians, school board members and community leaders as well as current high school students and alumni.

Eight Port Washington students spoke at the march, vigil and call to action Saturday night, where nearly 1,000 people gathered on the lawn of the United Methodist Church of Port Washington.

Schreiber High School freshman Charlotte Kerpen said when she started high school last fall, she wasn’t afraid to walk in the building — but she is now.

“We will be the generation to make a change,” Kerpen said. “Please, for me, for you, for your friends, for your kids, for your siblings, for everyone: Please don’t be a bystander Rise up. Let’s turn this feeling of fear into a feeling of hope, and let’s turn these feelings into actions.”

Schreiber junior Eden Franco, who spoke along with her freshman sister Emory, said it is easier for her to buy a gun when she turns 18 than it is to apply for colleges.

There have been 25 fatal school shootings since the Columbine High School shooting in 1999 in Colorado as well as mass shooting incidents in Las Vegas, Orlando, Florida, and Aurora, Colo.

“How many more lives are going to be taken before our government decides enough is enough?” Franco said. “I can say all day we want change and stricter gun laws, but that won’t get us anywhere. Marching alone will not get us anywhere.

“This isn’t about being in the wrong place at the wrong time. This is about normal kids, like me, waking up every single day thinking about the dangers of going to school and feeling unsafe in an environment that promises education and protection.”

Michael Monasterio-Redelick, a sixth grader at Weber Middle School, said the day after the Marjory Stoneman Douglas High School shooting, rumors were flying around the Port Washington school’s hallways that someone was planning something similar for Weber.

“A lot of people didn’t come to school, and I don’t really blame them,” Monasterio-Redelick said. “A lot of people are scared, and I was, too. We all stayed strong, we all stood together. I hope in the future we’ll make history by stopping mass shootings like this and making the government realize what they’re doing is wrong.

“They need to tell the [National Rifle Association] enough is enough.”

The Rev. David Collins, a co-pastor at United Methodist Church of Port Washington with his wife the Rev. Romi Abelova, said he was in high school in South Carolina when the Columbine High School shooting occurred in 1999 in Colorado.

“When is the spilt blood or our kids finally going to be enough?” Collins said. “I thought it was Sandy Hook, but it wasn’t. When can I quit worrying if my daughters’ school is going to be the next bloodbath?

“When can I quit worrying if my church might be the next place in the news like Mother Emanuel AME Church in Charleston? They sat there with their murderer for an hour before the breath of life was taken from them as they sat there with that racist who had a glock and 74 shells to fire.”

At the end of the Port Washington march, Collins called for residents to take to Twitter, tweeting for common sense gun reform from Sen. Mitch McConnell and House Speaker Paul Ryan as well as companies such as FedEx and Bass Pro Shops who offer discounts to NRA members.

Tables were also set up outside the church with members from the Nassau County Board of Elections to help residents register to vote as well as petitions to sign hoping to block the Concealed Carry Reciprocity Act of 2017.

Port Washington resident Brad Schwartz, who attended the march, said that whole calls for action in the past have come and gone, the concerned voices are growing louder since the Parkland, Florida, school shooting.

“The difference this time is that the March for Our Lives movement is led by students who are unafraid of the NRA and undeterred by seemingly insurmountable political roadblocks,” Schwartz said. “I see in their plight, a generation of youth harnessing the traditional power of Democracy with modern spirit and maturity. I marched today in solidarity with the brighter future they offer America. And I marched, because I want our children to be safe — even while they serve as the better example to our nation.”

In Great Neck, hundreds of people attended a rally organized by North Shore Action, a citizens action group, where students, politicians and religious leaders called for political action on guns.

There were occasional chants of “enough is enough!” and “vote them out!” from the crowd, as they waved signs ranging from “March for Our Lives” to ones calling on politicians to put the children to first.

Talia Katz, a sophomore at Great Neck South High School, told the crowd that people are entitled to their lives and “guns are the problem.” With some of the highest rates of mass shootings, she goes on to say, America needs to take action.

Among her suggestions for new gun laws were an assault rifle ban, changing the legal age to buy a weapon to 21, closing gun show loopholes and making detailed background checks “mandatory and universal.”

Town Supervisor Judi Bosworth, drawing on her time as a teacher and member of the Great Neck school board, said mass school shootings have become all too common and that people “cannot accept silence or kicking the can down the road.”

“I started my career as a school teacher back in the day when we never would have imagined that such unspeakable violence would take place at a school, a place where parents send their children to be educated, and a place that was always thought of as safe,” Bosworth said. “But no more.”

“We are all here today because we have been moved and inspired by students across the country who will no longer risk their lives waiting for someone else to take action,” Bosworth added. “I stand with them.”

Sabrina Namigohar, a student at Great Neck North Middle School, said in an interview she came out to the rally because she didn’t want people to fear going to school in wake of the mass shootings.

“I was so scared in my own school and I didn’t want anyone else to experience that,” Namigohar said. “It’s so bad that this is happening everywhere. And I just want to make sure that doesn’t happen.”

Namigohar added she hopes they can see the day where such rallies won’t be necessary.

Dan Nachmanoff, a former park commissioner and Mayor of Russell Gardens, said after the rally that a significant part of the community came out with the singular goal of keeping their children safe in schools.

While a supporter of the second amendment, he said assault rifles need to be kept out of the hands of dangerous people.

The SUNY Old Westbury march, which was a mix of college students, adult residents and some children, was initiated and organized by the students, senior Samantha Barr said.

“Kids are dying, and we think it’s really important,” Barr said. “People younger than us shouldn’t have to be afraid of guns. I know personally, I’ve talked to a few of the Florida survivors, and what they’re going through is terrible. No one should have to go through that, especially kids who are just trying to get an education.”

Nassau County Legislator Joshua Lafazan (D-Syosset) said he attended the Glen Cove rally not in his elected capacity, but in support of the nation’s youth.

“I felt it was crucial to show my support for these young folks who are demanding accountability from their elected officials, organizing their neighbors in protest, and driving their classmates to the polls,” Lafazan said. “This was democracy in action on display from the next generation of Americans, and I wanted to take part in it.”

The March for Our Lives protests follow a series of walkouts across the North Shore on March 14, where students left class to stand in solidarity with Parkland to try pushing politicians to prioritize gun control legislation.

Blumenfeld and BSE team up on Coliseum development
Next Article 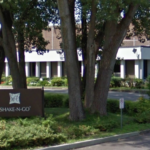