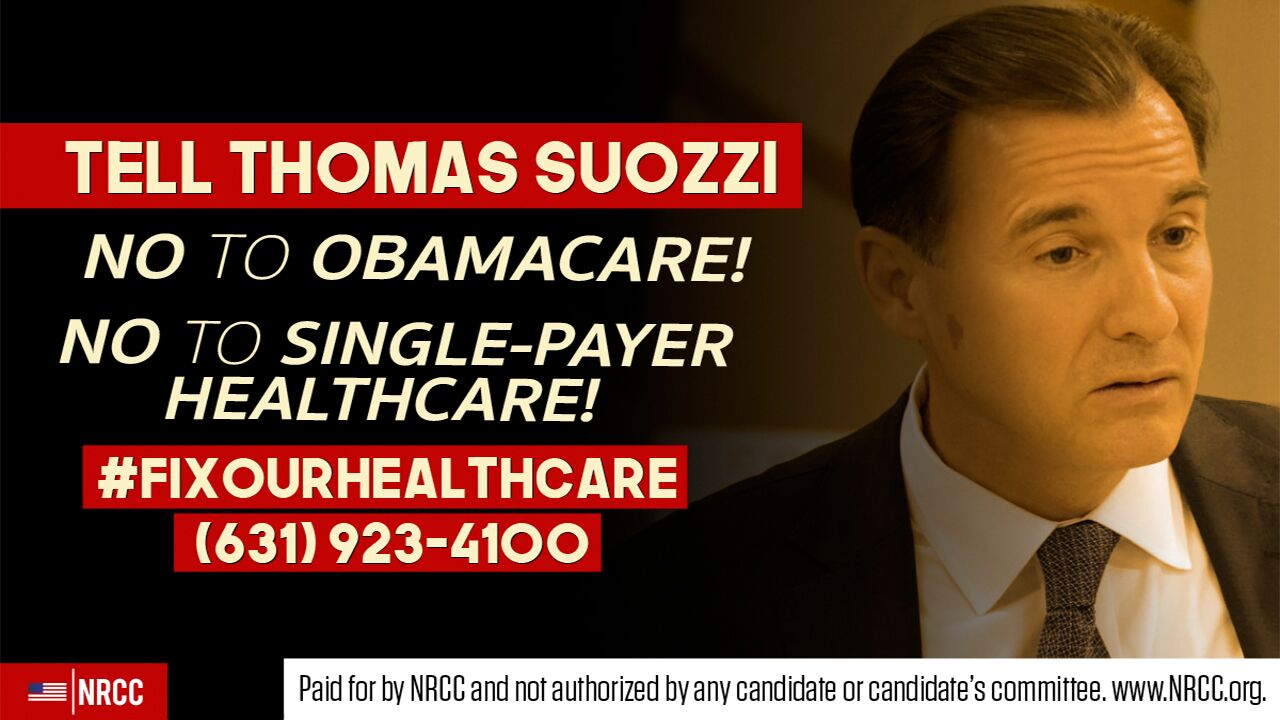 The National Republican Congressional Committee plans to drive this billboard around Oyster Bay on Friday. (Image courtesy of NRCC)

The National Republican Congressional Committee is taking U.S. Rep. Tom Suozzi to the streets on Friday.

The GOP group is paying to have a truck drive around Oyster Bay on Friday with a billboard pushing the Glen Cove Democrat to get behind Republicans on health-care reform.

“Tell Thomas Suozzi no to Obamacare! No to single-payer healthcare!” the billboard reads.

Suozzi, who represents the 3rd Congressional District, has committed to protecting the landmark Affordable Care Act and spoken favorably of a single-payer system. But the NRCC wants to tell his North Shore constituents that those policies keep the property taxes high, spokesman Chris Pack said.

“Suozzi says he wants to get things done, so maybe he should start by easing Long Island’s skyrocketing property taxes instead of scoring brownie points with [Democratic Minority Leader Nancy] Pelosi,” Pack said in a statement.

Billboards targeting Democrats in Nevada, Florida, New Jersey and New Hampshire are also set to hit the road, Pack said. He would not disclose how much the NRCC paid for the Oyster Bay billboard.

Suozzi has said he wants to “mend” but not eliminate the Affordable Care Act, also known as Obamacare. He appeared at a rally in January supporting the law when President Donald Trump was making moves to repeal it.

Suozzi opposed the American Health Care Act, the Republican proposal to replace the Affordable Care Act, before it was pulled from consideration for a lack of GOP support.

The bill contained an amendment that would have forced New York State to pay about $2.3 billion in Medicaid costs shouldered by counties outside New York City.

Republicans said the measure would reduce local tax burdens. But Suozzi and other New York Democrats opposed it, saying it would be too much for the state to handle.

Kim Devlin, a Suozzi political spokeswoman, noted that Suozzi and other Democrats proposed having the federal government cover county Medicaid costs, which would reduce local taxes but protect the state’s finances.

“This is so predictable and cookie-cutter,” Devlin said in a statement. “The only surprise is that they think it’s a good idea to launch a phony attack on Good Friday.”

Pack rejected Devlin’s criticism, saying, “There’s nothing ‘phony’ about middle class taxpayers and seniors being taxed out of their homes.”

JCC’s Israelfest set for May 7 in Port
Next Article