An audit of Old Westbury revealed an unidentifiable surplus that has been sitting in village accounts for years, officials said.

In the audit, covering June 1, 2015, through Sept. 30, 2016, officials had three key findings: bail money was posted into the three village justices’ business accounts instead of an account specifically for bail money, justices did not perform monthly bank reconciliations of their business accounts and two of the accounts had an unidentifiable surplus of $1,743.

Justice Susan Schmidt-Chorost was not yet in office during the audit period, but she said the report was overall positive.

“It went really well,” Schmidt-Chorost said. “I wasn’t there for the time period they covered, but the state said it went very well and they were very impressed.”

She said the village has addressed all recommendations in the audit report, including creating a separate account for bail funds at Chase Bank. The justice’s individual accounts are for fines to be deposited at the end of a court day.

In regards to the excess $1,743, Schmidt-Chorost said the money has been in the account for years and its origin could not be traced.

“It has to be about five years old,” Schmidt-Chorost said. “The good news is none of the money is missing, and we have a surplus of $1,743 that they suggested if we cannot find the origin of the money that we put it into the village’s general fund account.” 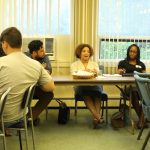