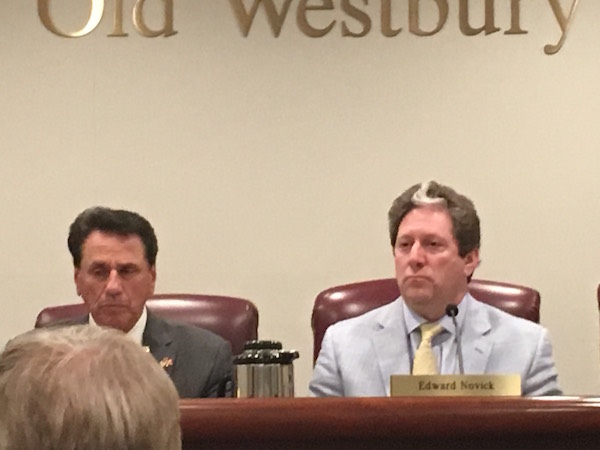 Old Westbury Mayor Fred Carillo (left) and Trustee Edward Novick at a Board of Trustees meeting on Monday.

The Old Westbury Board of Trustees on Monday unanimously adopted a $14.5 million 2017-18 budget that keeps property taxes flat.

“Other villages complain a 1.14 percent tax limit is not enough to fund them,” Trustee Leslie Fastenberg said, referring to a state mandated cap on tax increases. “There’s a way to get it done.”

The budget is projected to yield an $82,412 surplus, which the village will put toward capital projects, Trustee Edward Novick said.

The village will transfer $650,000 from its capital fund in the 2017-18 fiscal year to pay for road repair as well as the digging of a new water well.

Work on the new well, the seventh in the village, is currently under way in the northwest corner of Old Westbury, off of Glen Cove Road, he added.

At the meeting on Monday, Mayor Fred Carillo incorrectly asserted that the 2017-18 budget will cut spending by $80,000. Ridgway said Tuesday that it will in fact increase spending by $80,244.

Ridgway said he had given the mayor the wrong information.

The largest expenditure in the budget is $5,679,000 for the village police force, which employs 26 individuals, including 17 officers, two detectives, two lieutenants, four sergeants and the police chief, Robert Glaser.

The total personnel cost for the police force, including pension and benefits, is $4.7 million, Glaser said. Additional costs include computer equipment, patrol cars, firearms, ammunition and other supplies.

“We make sure police are properly equipped to provide the best service for people in the village,” Novick said. “We have the best police department of any municipality in Long Island.”

Cheryl Gimbel, an Old Westbury resident, said the police presence in the village has declined.

Fire safety contracts, the second largest expense in the budget, account for $1,245,000. The village receives fire services from the Westbury Fire Department and the Roslyn Highlands Fire Department.

Permits and fees are projected to raise an additional $750,000 and police justice fines will total an estimated $300,000.

Deputy Mayor Marina Chimerine was not in attendance on Monday.