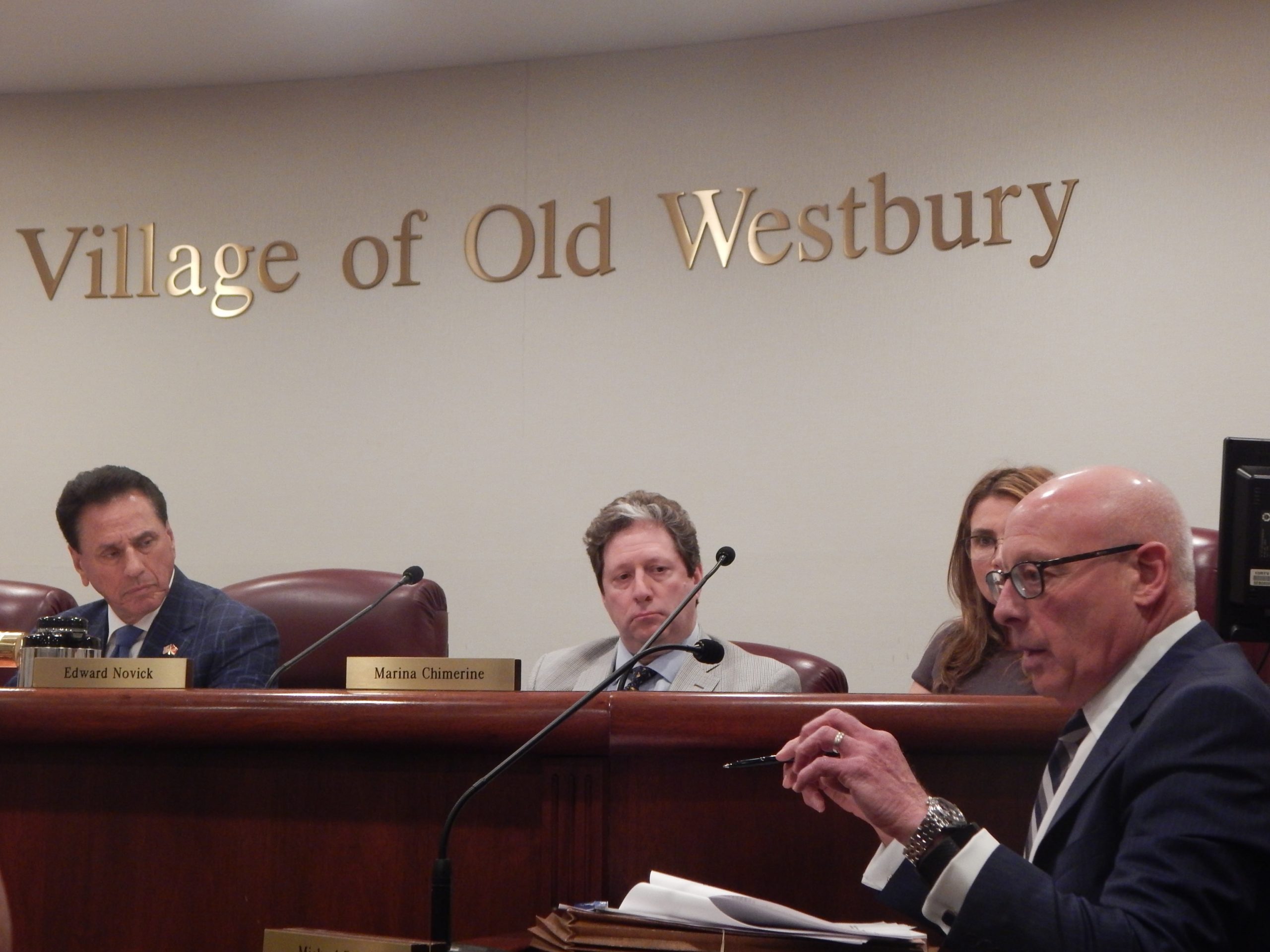 The Old Westbury village Board of Trustees is seen on Monday. (Photo by Kristy O'Connell)

Several Old Westbury residents expressed frustration on Monday over the approval of the construction of the Queen of Peace Cemetery.

While the village Board of Trustees finalized the approval of the construction of a cemetery at 31 Hitchcock Lane in November 2016, a request for additional entry piers and gates at the site drew public attention once more.

Since 1995, the Diocese of Rockville Centre has owned the plot of land that is now set to become a cemetery, Mayor Fred J. Carillo said.

Though the village spent over 20 years fighting the establishment of the cemetery, it was determined by the federal courts under the Religious Land Use and Institutionalized Persons Act that the diocese has a right to build a cemetery on the land it owns, he said.

Trustee Edward Novarick said that continuing to dispute the cemetery would be overwhelmingly expensive and that “bankruptcy of the village was not the option.”

After a settlement was reached with respect to the federal court litigation, the village agreed to move forward with the approval of the cemetery under the condition that several steps are taken to protect the area and maintain the area’s residential aesthetic.

“Just as the diocese has the apparent constitutional right to build a cemetery, what right do we, as a democratic community, have to say that we do not want something of this nature in our town?” asked a resident of Old Westbury who asked to remain unidentified.

Several residents also suggested that they never received communication or notice regarding the approval of the cemetery, to which the board responded that some residents may not live within the area that requires notice of the cemetery, the 300-foot radius from its perimeter.

Carillo emphasized that the village did “everything in its power” to ensure the project is considerate of the residents of Old Westbury, requiring buffers of trees around the perimeter of the cemetery along with a phase-in plan that requires the cemetery to be gradually developed over the next 50 years.

The construction of the cemetery has been approved since 2010, said Carillo, and the sole possible action with regard to the cemetery for the evening was to amend the development plan of the cemetery to include entry gates and piers at Hitchcock Lane and Jericho Turnpike.

Walter Sieber, a representative from Cameron Engineering, described the piers and gates as six-foot by six-foot granite stone piers with concrete caps. He said that from the road, the structures should not appear obvious due to their natural materials and a location with a significant setback from the road.

Cary Wolf, a resident who lives just off of Hitchcock Lane, expressed concern about the exit on Hitchcock Lane, saying that deeming it a left-turn only exit will not be enough to prevent drivers from turning right.

Michael Sahn, the village attorney, responded that part of the approval of the cemetery required that “the driveway shall be constructed at an angle to channelize traffic in the southbound direction,”  making a right turn extremely difficult.

Several other residents also requested that the exit on Hitchcock Lane be moved to Powell Lane, where the exit would be located directly across from a church.

Given the significant amount of protest regarding the location of the entrance and exit of the cemetery, the board postponed the approval of the piers and gates, with the goal of disseminating more information to the public about the cemetery’s development.

Carillo suggested that the board may attempt to showcase a computer-generated layout of the cemetery to give residents in the community a better understanding of what to expect.