It has been another bad year for the decrepit Nassau Republican political machine.

First, there was the conviction of former County Executive Ed Mangano and his wife, Linda Mangano, in March.

Elected by a fluke in 1999, Mangano was unfit for the job. He had no understanding of municipal finance and thought governing meant attending ribbon-cutting ceremonies and grinding out self-congratulatory press releases.

Worse, he was corrupt. Believing he was entitled to a lifestyle above his pay grade, he convinced a vendor to pay for vacations and home repairs, and to give his wife a no-show job for which she was paid over $400,000.

And, instead of cutting a plea deal that would have let his wife off with a slap on the wrist, the delusional Mangano put her on trial with him and now she will have to do hard time with him.

Next, in April, Hempstead Town Councilman Edward Ambrosino, who was indicted on March 31, 2017, pleaded guilty to income tax evasion.

This leading GOP operative and former special counsel to Ed Mangano was ordered by Eastern District Court Judge Joanna Seybert, to pay $275,000 in back taxes, $370,000 in legal penalties and $700,000 to his former law firm — that convicted felon Dean Skelos was once a partner — Ruskin, Moscou and Faltischek.

In the original indictment, the U.S. Attorney contended that Ambrosino willfully attempted to evade paying federal taxes by filing fraudulent individual and corporate income tax returns and phony expense deductions that included “rental payments for a Manhattan apartment paid by Ambrosino on behalf of a third party.”

Unfortunately, because Ambrosino copped a guilty plea we will never know the name of the “third party,” nor will we learn the purpose of the apartment and who stayed in it. (The Jack Lemmon movie, “The Apartment,” comes to mind.)

Then, on May 29, the first deputy county executive during the Mangano years, Rob Walker, pleaded guilty to an act of obstruction of justice.

Walker was indicted in February 2018 by the feds for obstruction of justice, for lying to the FBI, and for accepting and then trying to hide $5,000 in cash he accepted from a county contractor.

Walker, who during his time as a county official, appeared to spend most of his time raising funds for the Mangano Campaign Committee and the Hicksville Republican Committee, told the federal judge, “I knowingly and unfortunately … met with an informant working with the government and I asked him not to disclose the $5,000 he gave me.”

Responding, U.S. Attorney Richard Donohue said, “While holding public office, Walker attempted to conceal his corrupt conduct by urging a witness to lie to the grand jury… Those who swear an oath to serve the public are expected to promote transparency, not obstruct justice.”

Like the Ambrosino case, Walker copping a guilty plea prevents the public from knowing the full story. Just who the contractor was that handed Walker $5,000 at a University of Notre Dame football game in South Bend, Ind. remains a mystery.

Vendittto was indicted by the DA on charges of “bribery, money laundering, and crooked multi-million-dollar property deal.”

With the Democrats on the ascendency in Nassau, will they too succumb to similar temptations that brought down so many Republicans?

He had compiled as much as $1.4 million in tax debt, pleaded guilty to criminal tax fraud, and was sentenced to jail terms by both federal and state judges.

So, as you stay tuned to Nassau’s political antics, reflect on the French maxim “plus ça change, plus c’est la même chose” (The more things change, the more they stay the same). 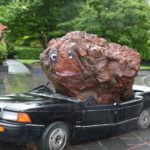 Our Town: Shadow time for America
Next Article

A Look On The Lighter Side: So — How well did Einstein’s mother understand his work?