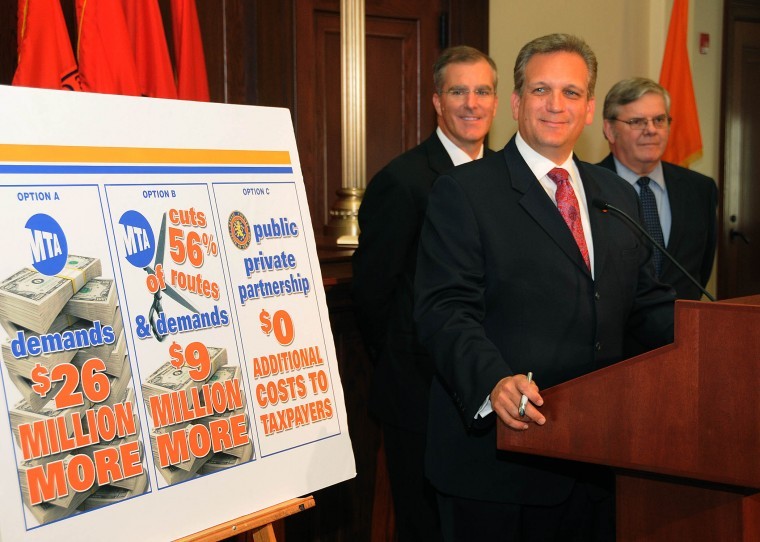 After a secretive, months-long process, Nassau County Executive Edward Mangano announced last week that French-based company Veolia has been selected to operate Long Island Bus as of Jan. 1 for $106 million, down from the current budget of $141 million.

“A public-private partnership to operate Long Island Bus makes sense for taxpayers,” Mangano said. “The steps we take today will protect riders and ensure bus service continues into the future. Residents will enjoy accountability for their tax dollars as the private sector will run bus service more efficiently and effectively and protect residents from real property tax increases.”

Subsidies from the county would total at least enough to maintain grants, which Mangano said was $2 million to $4 million.

He promised routes and fares would be remain stable for at least a year. A plan from the MTA would have cost Nassau an additional $9 million with a 56 percent reduction in routes.

Overseeing the transition is Mark Aesch, the outgoing chief executive officer of the Rochester Genesee Regional Transportation Authority. The change to Veolia could require a move away from the Metrocard, since the fare boxes currently used are owned by the MTA. The buses are owned by Nassau County.

Veolia operates transit systems throughout the world, including Atlanta, Denver, Las Vegas, Boston and San Diego. In Pheonix, they wracked up approximately $3.3 million in fines due in three months, a majority of which were for late buses, according to New Times Pheonix.

“Veolia will bring private sector innovation, significant experience in other U.S. and European markets, proprietary technology, and cost-saving techniques to a system that is vital to the residents of Nassau County,” said Mark Joseph, chief executive officer of Veolia Transportation North America. “With our broad role in managing Nassau County’s bus system, we will be able to create efficiencies that will benefit taxpayers while providing better service for riders.”

After details of a contract with Veolia are negotiated by the county, the contract will come to a vote before the Legislature.

Nassau County Legislator Wayne Wink (D-Roslyn) expressed concern that the contract will come before the Legislature at the last minute, without enough time to properly vet and amend the contract.

“This is a train wreck that quite frankly has been a year in the making,” Wink said. “The only way I can see this working out is if Veolia has a greater heart than this administration.”

Nassau County Legislator Judi Bosworth (D-Great Neck) said bids in other cities have proven to be overly optimistic, which could be the case in Nassau County.

“It’s got a ripple effect that I think people aren’t perhaps aware of, and the possible ramifications of this are great,” she said. “I think the unintended consequences of how this could effect our economy are something we really need to be thinking about.”

If privatized bus service proves to be unreliable, she said it would effect everyone who lives and works in Nassau County.

An example is provided by the Village of Saddle Rock Mayor Leonard Samansky, whose home health-care worker depends upon Long Island Bus to get to work.

“When people think it’s not going to affect them, you never know,” Bosworth said. “You cannot be sure you will never be in need of those services.”

Nassau Legislator Richard Nicolello (R-New Hyde Park) said prior to Veolia’s selection that he is confident the Legislature will approve a contract that properly incentivizes a private vendor to provide the promised level of service. He said he will also look for terms that will give the Legislature an ongoing voice in bus service.

“I think Long Island Bus worked pretty well, and I would rather MTA continue to provide the subsidy as they did in the past,” he said. “That’s not a possibility now that the MTA stepped away.”

Long Island Bus driver Cindy Tropeano questioned whether drivers for Veolia would be provided with the same level of scrutiny as MTA drivers.

“We go through a fine tooth comb all the time simply because we move the public,” she said.

To reduce the risk of accidents from bus drivers in a hurry, she said they are penalized if they are early to bus stops and are required to take the road test each year.