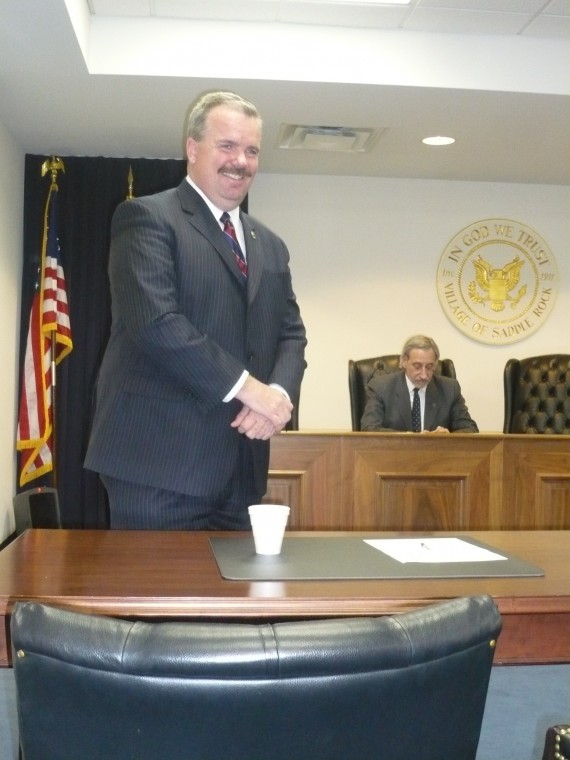 Closing the 3rd Precinct and merging the 2nd and 6th Precincts are off the table, but Nassau County Executive Edward Mangano and the county’s acting police commissioner said in separate appearances this week that they are continuing to look at different options to cut $15 million from the Nassau County Police Department.

Thomas Krumpter, acting commissioner of the Nassau Police Department, told Great Neck officials that a plan presented earlier in the year to merge the 2nd and 6th Precincts was no longer on the table at an emergency meeting of the Great Neck Village Officials Association on Wednesday, April 20.

“You’d think from 700 million budget, $15 million is something we could find by dusting off the books,” Krumpter said. “It’s not so.

In August Nassau County Executive Edward Mangano proposed the consolidation of administrative functions of the 6th and 2nd Precincts and moving 6th Precinct headquarters to the 2nd Precinct location in Woodbury.

In response to questions from Village of Mineola Mayor Scott Strauss during an appearance at the Mineola Chamber of Commerce on Tuesday night, Mangano stated flatly that the 3rd Precinct would not be closed – despite widespread rumors to the contrary.

“There will not be a closure of the 3rd Precinct. I can tell you that,” Mangano said.

Under further questioning by Strauss, Mangano also said the county would not eliminate the Nassau County Problem Oriented Police Unit know as the POP, but it might be subject to “adjustments.”

“The end game is to save taxpayer money, but maintain public safety,” he said.

Mangano said that last year the county had reduced the police budget by $20 million by eliminating 125 desk jobs and putting more police on the street, and crime had dropped more than 10 percent.

The current police department reorganization is part of Mangano’s move to fill a $176 million deficit Nassau County Interim Finance Authority found the county had for the upcoming financial year.

In his appearance in Great Neck to discuss the county’s plans for cutting police costs, Krumpter said he expected a final reorganization plan within weeks.

“On the table is reduction of services,” he said, stressing that no final decision has been made. “There are many scenarios that would affect the 6th Precinct.”

He said the 1st, 3rd, and 5th Precincts do twice as much work as the other five precincts.

“The precinct is an administrative hub,” he said. “In a perfect all eight precincts would have a common workload.”

Krumpter said he and other police officials want to see the POP program continue.

“From our perspective in Nassau County Police Department and the eight precinct commanders and deputy commanders, the last thing they want to hear from me is that we are cutting POP,” he said. “We will see how is this plays out, The Police Athletic League and POP are the things communities are most concerned about losing.”

But like Mangano, Krumpter offered no guarantees about the POP program.

We are looking at everything,” he said. “Everything on the table. I am not sure how will play out.”

Krumpter added that while “everything is on the table” to extract the $15 million in cost reductions, what is untouchable is that there are 194 patrol cars “today, and tomorrow.”

Krumpter said he has been seeking feedback regarding possible cuts both outside and within the force.

“I have been attending every single possible civic meeting that I possibly can,” he said. “Ultimately I will make a recommendation to the county executive.”