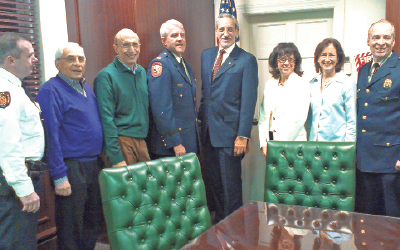 Though Great Neck’s 6th Police Precinct is no more, the Nassau County Police Department has not forgotten the peninsula, according to 3rd Precinct Commander Sean McCarthy.

McCarthy addressed the Great Neck Village Officials Association Wednesday, telling concerned officials that police presence on the peninsula had not decreased despite this summer’s merger of the 6th and 3rd precincts.

The consolidation, which turned the 6th precinct’s Manhasset headquarters into a community policing center under the 3rd Precinct’s command, had spurred fears that Great Neck’s police resources would be diverted to higher crime areas.

But McCarthy said officers had largely stayed on the same beats and credited the merger with freeing up greater manpower to solve issues in the former 6th Precinct – now termed “3rd North.”

“The cops are by and large where they were when the consolidation took place,” McCarthy said.

McCarthy acknowledged there were road bumps during the merger, but said they affected officers and the precinct’s organization rather than the service provided to residents.

“The merger itself was not all sweetness and light,” he said.

Morale had suffered immediately after the consolidation, McCarthy said, but had rebounded in recent weeks despite trying circumstances.

McCarthy said his officers’ handling of the recent presidential debate at Hofstra University had drawn praise and raised morale, and that they were persevering despite Hurricane Sandy and the recent deaths of officers Joseph Olivieri and Arthur Lopez in the line of duty.

“While they are fatigued they are aware that they’ve done a great job under trying circumstances for the last six months,” McCarthy said.

Acknowledging the concerns raised by officials, McCarthy said he recognized that Great Neck had a need for police resources despite its comparatively low rate of street crime.

“Just because these areas are more affluent doesn’t mean they don’t have problems,” he said.

McCarthy refused to specify the nature of those problems to the Great Neck News.

Village of Great Neck Trustee Mark Birnbaum called for better communication between police and villages in the sharing of crime information.

“It’s very frustrating on our end… when things are going on and we get questions and we have no idea,” Birnbaum said.

McCarthy said he was committed to making himself and the precinct available to officials, but that it is difficult to determine what incidents should be preemptively shared with the villages.

After commending McCarthy for his officers’ response to Hurricane Sandy, Village of Great Neck Plaza Mayor Jean Celender took the precinct to task for what she said were insufficient patrols and traffic summonses since the merger.

“I’m telling you it’s a problem when we don’t have the presence and the enforcement to a level we find acceptable,” she said.

McCarthy acknowledged a drop off in traffic enforcement, which he attributed in part to a focus on relief efforts in the weeks following Hurricane Sandy.

He said the precinct was working to increase the amount of enforcement and summonses issued.