Home Opinions Our Town: Wolfe had an Appalachian story to tell

France needed Victor Hugo to write “The Hunchback of Notre Dame” for the world to fall in love with Paris. Spain needed Cervantes to pen “Don Quixote” before we could understand the magic of the Iberian Peninsula and Asheville, N.C., needed Thomas Wolfe to write “Look Homeward, Angel” to fathom the curious character of Asheville.

I had heard that Asheville was one of America’s favorite cities and I’ve wanted to see the Great Smokey Mountains, so I decided to read “Look Homeward, Angel” and ready myself for a visit. I had read some of the Southern writers like Flannery O’Conner, Carson McCullers, Cormac McCarthy, Mark Twain, Truman Capote but never Thomas Wolfe.

The novel is largely an autobiography with a sprawling, lyrical, poetic stream of consciousness, comparable to James Joyce. It’s filled with loneliness, anxiety, death, insight, love and longing as he described growing up in Asheville with a highly intelligent, ambitious, insane and alcoholic family.

So, armed with this brief taste of the peculiar Appalachian charm of the South, I booked my ticket and began to establish my itinerary. I noticed that the biggest auditorium in Asheville was Harrah’s Cherokee Center and a blue grass band headed by Billy Strings was playing. I know exactly nothing about bluegrass music but felt this would be a perfect way to perform immersion journalism along the lines of Hunter S. Thompson, Gay Talese or George Plimpton.

The performance was on a Friday night, so I drove down to the Harrah’s Cherokee Center long before the show to familiarize myself with the parking situation. I pulled down a street immediately behind the arena and as luck would have it, I found a spot right away. However, I noticed an unsavory group of shall we say “homeless person’s/ dead heads/hippies” encamped behind the arena that seemed to be in a state of extreme casual relaxation. I have nothing against relaxation, dead heads, hippies or the homeless but when I saw one urinating on the wall I immediately grew concerned and off I went to find another spot to park.

I got lucky again and parked right across Pritchard Park in the heart of downtown Asheville. But once again not so lucky, since I had to manage my way past all sorts of odd characters sitting about on the sidewalk and making demonic type requests for money for another drink.

I was getting a sense of the creative, artsy, hazy, rambunctious atmosphere of Asheville. Black Mountain College was once here and the famous art school for John Cage, Merce Cunningham and Robert Rauschenberg. I was told by a tour guide that the famous sanitarium in town had treated the likes of both Zelda Fitzgerald and James Taylor. So before I heard a note from the guitar of Billy Strings, I was already fully immersed in my gonzo journalism story of Asheville.

I finally made it safe and sound to the arena, sat down quietly and watched as this large 10,000-seat center began to fill to capacity. Apparently, I had been in the dark all these years when it comes to bluegrass. I knew that Billy Strings had taken up guitar at the age of 4, that his father and grandfather were master blue grass players and that at the age of 29 he was considered a bluegrass star with a Grammy to his name. The last time I saw a rock band play in person was The Stones at Shea Stadium back in 1989. That was the performance that required Shea Stadium to close for five days because the crowd rocked so much in the mezzanine that the cement cracked.

I certainly did not expect this show to compare, but I was rudely awakened. Billy Strings has boyish good looks, a full head of blond hair, numerous tattoos and a silky voice, but that does not come close to explaining this phenom. He was accompanied by a bass player, a banjo player and another who played the mandolin. Still harmless until they start to play. The performance was mostly instrumental and the best way to describe the impact it had on me is to say that listening to this band live was akin to witnessing a very large locomotive that was on fire and roaring full speed right through Asheville.

They had this extraordinary ability to fuse sounds with each other like the jazz riffs of the Wynton Marsalis Band. The blue grass aficionado “Uncle Ted” White told me Billy Strings plays TDC or Top Dead Center. He explained that Strings can get exactly in the middle of the beat so that his banjo and mandolin leads can also shine. In addition, Billy Strings has a background in heavy metal. Billy Strings has the talent of a Jimmy Hendrix, the improve ability of a Keith Jarret and the looks of a Justin
Bieber. Billy Strings is a boy genius to be reckoned with.

Now I don’t have room to tell you of The Biltmore House, the drives along the Blue Ridge Parkway or the jaw-dropping views of vistas and waterfalls in The Great Smokey Mountains. You will have to engage in some immersion journalism for yourself and book a trip to Asheville. The incredible beauty of the Blue Ridge Mountain Range, the warmth of the people with their bluegrass music and the artsy vibe of Asheville will make you proud to be born in America.

For the story of Asheville is the story of America. It’s full of riches and wonder and beauty. It’s filled with vista after vista of great space, great freedom and great energy. Asheville has people like Billy Strings and “Uncle Ted” White. Places like the Grove Park Inn, the Dixieland Boarding House and The Biltmore House. Restaurants like Bouchon’s and Rhubarb. All set in the Blue Ridge Mountains and their big brother, The Great Smoky Mountains, just minutes away. It was a wonder to behold. 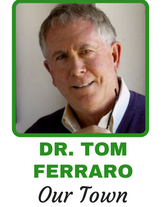