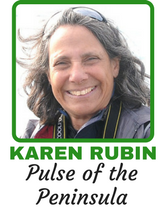 This week, our nation faced the first true serious crises of the Trump era which were not of his own making. And he failed colossally, revealing in such harsh light what a pathetically lacking “leader” he is, thoroughly bereft of “moral authority.”

It started with North Korea and was brought into stunning clarity in his reaction to the horrific violence in Charlottesville, when he failed to denounce the White Supremacists, neo-Nazis, the KKK, the alt-right by name.

Instead, in a sick and evil way, Trump tried to deflect “responsibility” for these hate groups who have not just come out of shadows and fringes, but have been emboldened, even validated, by his ascension.

Sure, he said he “condemned” this “egregious display of hatred, bigotry and violence,” but added the disclaimer, “on many sides, on many sides.”

This from the guy who attacks at will anyone who fails to do his bidding and who threatened North Korea with bringing down “fire and fury like the world has never seen” and  later reflected that perhaps his threats were not strong enough.

This from a man who repeatedly attacked Obama for refusing (for good reason) to use the term, “radical Islamic terrorism.”

His remarks to the people of Poland in July encapsulated his hypocrisy: “We are fighting hard against radical Islamic terrorism, and we will prevail.  We cannot accept those who reject our values and who use hatred to justify violence against the innocent.”

And in his “law and order” speech to Long Island police on July 28, that conflated the violent MS13 Gang with all Hispanics, he declared, “radical Islamic terrorism.

A term never uttered by the past administration.  Never uttered.” And proceeded to call for a crackdown on sanctuary cities and expanded Second Amendment rights — all music to the ears of any Neo-Nazi.

After he uttered his feeble statement on Saturday (in conjunction with a bill funding Veterans Affairs Department), he was asked more directly about White Supremacists and he simply turned his back; then, again after the signing, he responded with silence.

The Neo-Nazis took his silence as vindication and an endorsement.

“He didn’t attack us,” The Daily Stormer, a white supremacist website, exulted in response to Trump’s statement. “Refused to answer a question about White Nationalists supporting him. No condemnation at all. When asked to condemn, he just walked out of the room. Really, really good. God bless him.”

While it takes Trump mere moments to fire off a tweet attacking anyone who opposes him (Merck CEO Kenneth Frazier, who has since been joined by Intel’s Brian Krzanich and Under Armour’s Kevin Plank, for resigning Trump’s manufacturing council), the press, Republicans who don’t fall into line, it took him two full days — only after being pressured by staff who warned his agenda might suffer — to actually call out the hate groups by name:

“Racism is evil and those who cause violence in its name are criminals and thugs, including the KKK, neo-Nazis, white supremacists and other hate groups that are repugnant to all that we hold dear as Americans,” he said rather begrudgingly, as if in a hostage video, showing little of the outrage or compassion for Heather Heyer as he showed for Kathryn Steinle (“the beautiful Kate”) who, he continually points out, was murdered by a gun-wielding illegal immigrant in San Francisco.

His words on Monday were clearly scripted for him. His peeps know his true heart.

Indeed, as the New York Times noted in an editorial, Trump is doing nothing to match up with his clichés. Instead, his administration, which has a mind-blowing number of high-powered aides linked to the AltRight (Steve Bannon, Steve Miller, Sebastian Gorka), is whitewashing White Supremacists out of a domestic terror monitoring program, despite the fact that Neo-Nazis have been responsible for 49 homicides in the past 16 years, more than any other domestic extremist movement.

Trump has yet to acknowledge the bombing of a Minnesota mosque or the stabbing murder of two men in Oregon who came to the defense of Muslim women.

So I am not as optimistic as Charlottesville Mayor Michael Signer who said what happened would be a “turning point” in American history. I am not so heartened.

As the New York Times reported, these folks are emboldened and fired up with their manufactured sense of “victimhood” and by the wink-and-nod from the White House.

But in Charlottesville, the Neo-Nazis were shocked!, shocked! that “liberals” stood their ground.

And while Trump has demonstrated what a pathetically inadequate, morally bankrupt “leader” he is, people like Mayor Signer, New Orleans Mayor Mitch Landrieu and Gov. Andrew Cuomo are taking action.

Cuomo, who reacted swiftly after the attacks on Jewish institutions a few months ago, has acted swiftly again, advancing legislation to add the crimes of inciting to riot and rioting that targets protected classes to the list of specified offenses under the state’s hate crimes law.

“These legislative changes, known as the Charlottesville provisions, will reaffirm that while peaceful demonstrations are allowed, New York will never tolerate advocacy or the incitement of imminent violence against protected classes within our communities,” he said.