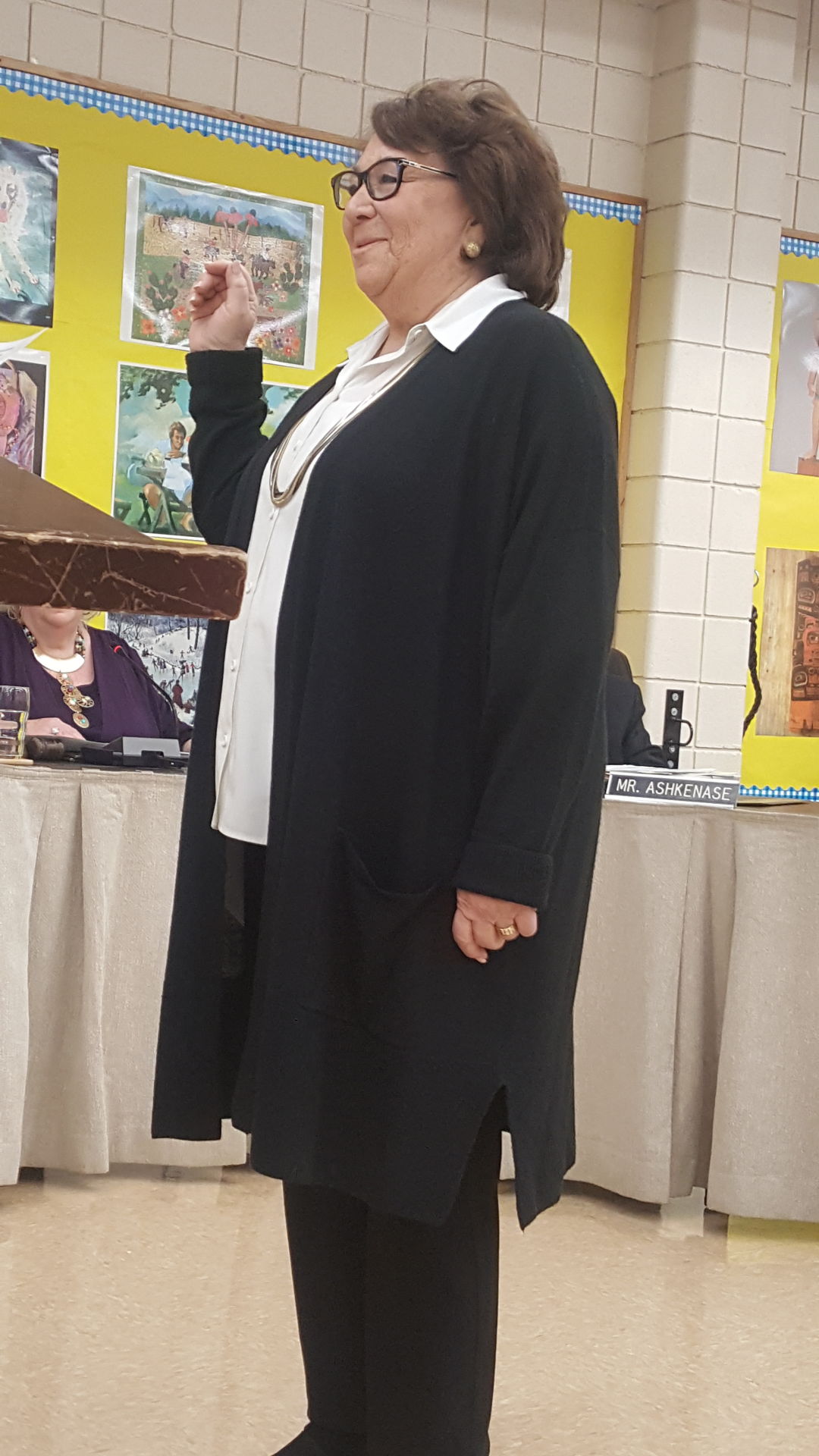 Donna Peirez, who won the Great Neck school board’s special election last week, was officially sworn in Monday as a Board of Education trustee.
Board President Barbara Berkowitz touted Peirez’s experience in the district as a “parent leader,” former United Parent-Teacher Council president and longtime first grade teacher at Lakeville Elementary School.
“Certainly she will bring all of her past experiences and expertise with her in this new role,” Berkowitz said. “But as she stated last week, she will now be wearing a new hat and is cognizant of the distinction between them.”
Peirez received 848 of the 1,869 total votes, or about 45 percent, to beat Donald Panetta, Josh Ratner, Nikolas Kron, Nicholas Toumbekis, Lori Beth Schwartz and Grant Toch for former Trustee Monique Bloom’s board seat. Bloom resigned in September because of her corporate travel commitments.
District Clerk Michele Domanick swore Peirez in at Monday’s school board meeting.
“As a longtime resident and advocate for the children of Great Neck, becoming a part of the Board of Education is another way in which I can serve the community and maintain the high educational standards of Great Neck,” Peirez said.
Berkowitz said the district “never anticipated” having 18 people pick up petitions to run for Bloom’s seat after she resigned.
“And we certainly never expected that nine people would submit their petitions after giving this fair consideration,” she said.
Two candidates, Mariana Ristea and Michael Darvish, withdrew from the race before the Dec. 6 election.
Also at the meeting, the board and architects from Patchogue-based BBS Architecture gave a third presentation on a proposed $85.9 million bond issue that would address the district’s capital needs and educational enhancements.
Officials outlined where $51.7 million would be going toward the district’s capital needs and how another $43.71 million would be spent on educational and school building improvements.
John Powell, the district’s assistant superintendent of business, said the proposed $95.41 million in spending would come from a bond issue of $85.9 million and about $9.51 million from reserves.
One of the biggest upgrades as part of the proposed bond would be the creation of a $6.58 million early childhood center, where children across the district would be offered a pre-kindergarten education, at the district’s Adult Learning Center on Clover Drive.
The district currently has a universal pre-kindergarten program at Parkville Elementary School, but the location is more convenient for students living in the southern half of the district.
Prendergast said the transformation of the Clover Drive facility into an early childhood center would offer pre-kindergarten for students zoned to begin kindergarten at E.M. Baker Elementary School, Saddle Rock Elementary School and Lakeville Elementary School.
As the facility currently houses the Adult Learning Center, Supportive Environment for All Learners and Pupil Personnel Services programs, the district is proposing to construct a building at the Cumberland Adult Center to relocate those programs. The proposed building would cost about $9.8 million.
Prendergast said the early childhood center would also help alleviate overcrowding at E.M. Baker.
One woman at the meeting said she was concerned about the amount of money being spent on the facilities.
“I’m not doubting that the program is going to be great and that it has very good effects, I’m just saying it’s a lot of money to be spending,” she said. “It just seems that there has to be a better solution.”
Berkowitz said the district pursued other options, such as renting a facility for the early childhood center, but they were more costly than what is proposed.
In January and February 2017, there will be further bond referendum presentations and informational meetings.
The district has scheduled a vote for Feb. 14 on the proposed bond issue.