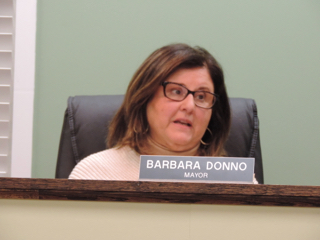 The Plandome Manor Board of Trustees on Tuesday approved a moratorium on construction of any wireless telecommunication towers or additions to existing infrastructure, but this does not completely halt the application process.

“The stop-gap provisions normally applicable to zoning moratoria do not apply in respect to cell tower uses and these small nodes,” village Attorney Rachel Scelfo said. “There was a [Federal Communications Commission] ruling that came down a few years ago, and it basically laid down the rule that these types of applications needed to be processed whether there is a moratorium in place or not.”

Scelfo said the moratorium is appropriate since the village has no regulations in its code that apply to the issue, but interim regulations need to be implemented in case an application comes in during the moratorium.

During the six-month moratorium, any application would be viewed as a special use permit application and would go before the Board of Trustees before a public hearing. The village would also have the ability to retain a consultant to assist with applications, and the cost would be borne by the applicant instead of the village.

ExteNet Systems Inc., an Illinois-based company that builds cellphone infrastructure for providers, has contacted the Town of North Hempstead about installing 66 nodes in the town, 23 of which would be in the 380-acre Plandome Manor village. No formal applications have been submitted to the town or the village, however.

A node is a group of transmitters and receivers connected to the service network and provides cell phone service in the area. Unlike cell towers, nodes are placed on top of existing utility poles.

Scelfo reached out to other towns and villages that have been approached about nodes, including the Town of North Hempstead and Laurel Hollow village, and both have been working with Center for Municipal Solutions founder and senior partner Richard Comi as a consultant to devise regulations.

Mayor Barbara Donno said she is concerned about the health effects of the nodes, but Scelfo said a federal ruling prevents municipalities from using health concerns as a reason for rejecting wireless equipment.

“A consultant would be helpful because some of the matters are very technical,” Scelfo said. “With radiation levels, you can’t look at the health effects, but [applicants] do need to show you they’re within proper limits.”

Donno said she wants trustees to meet with both ExteNet and different consultants before the end of the moratorium. Trustee Patricia O’Neill believes it would be a good idea to invite surrounding village officials to these meetings.

“If we’re doing a fact-finding mission, we should ask the other villages to join us,” O’Neill said. “I think we should all think about joining together to share the facts.”