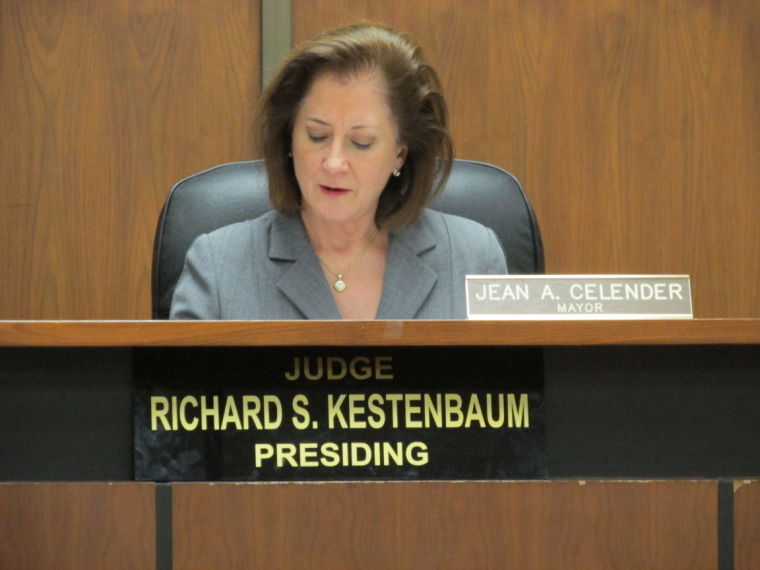 The proposed law, which was introduced in December, initially aimed to limit automated parking garages to residential buildings and to require a 24-hour, seven-day-a-week on-site attendant for the garage, but at last Wednesday’s Board of Trustees meeting, the board agreed that the law could be less restrictive.

Although Plaza trustees agreed to maintain the provision of restricting the garages to residential buildings, Mayor Jean Celender said the length of time an on-site garage attendant was required should be determined on a case-by-case basis and included as a condition in an applicant’s conditional-use permit.

“The law seems to be too specific to allow us make decisions pertinent to a particular case,” Celender said.

Paul Bloom, who represents Namdar, said having a 24-hour on-site attendant is an “extreme expense,” given that there are other ways of monitoring the garage through technology.

Automated garages use computers, cameras and sensors to mechanically move a car and park it in an empty spot. There are currently no provisions in the village code regarding automated parking garages.

Ari Milstein, executive director of Automotion Parking Systems, which would manufacture the automated garage at 15 Bond St., said at the Jan. 18 board meeting that the intention of making sure there is easily accessible help for any residents who might have a problem with the system is good, but it is limiting since there are a “multitude of ways” to monitor a garage.

Milstein said Automotion has employees at its New York City base station who use cameras and speakers to monitor each of its parking garages.

Automotion, he added, has a public parking garage in Washington, D.C., that it has been monitoring for the past two years from New York. If an issue arises, a concierge or doorman from the location will alert Automotion and it gets solved.

Bloom suggested at last Wednesday’s board meeting that the board consider a three-month period with an on-site attendant working between 7 a.m. and 7 p.m.

Deputy Mayor Ted Rosen said he had no issue with decreasing the required time for an on-site attendant as there was “no magic” to the six-month period that was initially proposed and since applicants would need to return to the board after the period ends to decide whether to lift the restriction or continue it.

Celender said it gives the village flexibility to determine the amount of time an on-site attendant is required in a specific application’s conditional-use permit, especially since there are multiple operators of automated parking garages with different monitoring methods than Automotion.

The board adjourned the public hearing, which will continue at its Feb. 15 meeting.