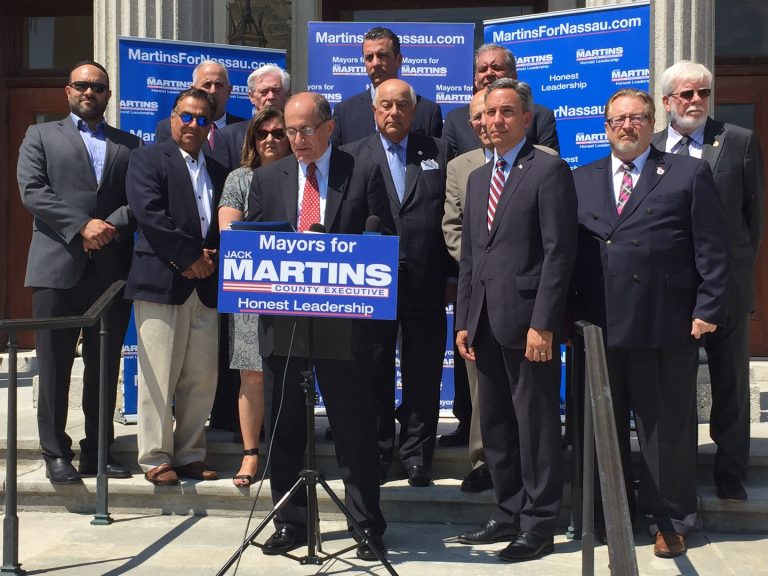 Mayors for Martins, a group of mayors from villages in Nassau County, endorsed Jack Martins, a Republican, for county executive on Wednesday.

Thirty of the 64 mayors from the towns of North Hempstead, Hempstead and Oyster Bay threw their support behind Martins, citing his experience working in a bipartisan way as a state senator and mayor.

Westbury Mayor Peter Cavallaro, standing with a handful of mayors at a news conference in Mineola, said “this election is about competence, not politics.”

“At this critical time in Nassau County’s history, we need competence, experience, integrity and leadership,” he said. “Jack Martins represents all of those things.”

Martins, a former four-term mayor of Mineola, said he was happy to have the support of the mayors, because “they know what it’s like to run a day-to-day government.”

“I am humbled to be here to accept the support of the local mayors,” Martins said.

Cavallaro said Martins has demonstrated a “history of being able to solve problems and move government forward.”

“As mayor of Mineola and when he was in the Senate, Jack got things done,” he said.

Flower Hill Mayor Bob McNamara, who is a registered Independent, said in a statement, “As a state Senator, [Jack] has been a good friend to his constituents in the Village of Flower Hill and all of our neighbors.”

“Jack Martins’ bipartisan approach to government appeals to me as a registered Independent,” McNamara said.

Barbara Donno, the mayor of Plandome Manor, cited Martins’ “track record of reaching across the aisle” and finding a common ground to get things done.

County Executive Edward Mangano has not announced if he will run.