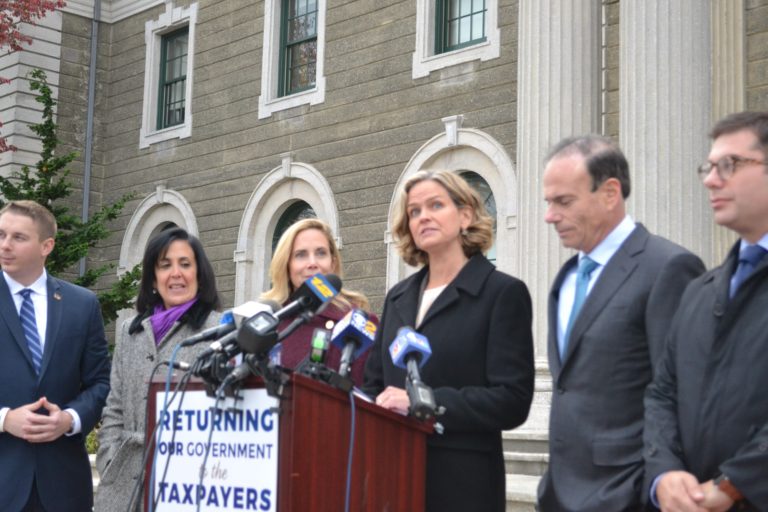 There are more registered Democrats than Republicans in Nassau County, but Republicans have traditionally dominated off-year elections. That is why six of the county’s eight executives have been Republican.

Laura Curran became the third Democrat elected as county executive by rallying the support of voters who are frustrated with Republicans in Nassau and Washington, political analysts said.

“I think it’s probably a mix,” said Craig Burnett, an assistant professor of political science at Hofstra University. “You’re going to get an increased turnout from Democrats who are unhappy with what has happened in Washington, and independent voters. There is also the corruption issues in county. People here are paying high taxes, so they’ll be sensitive to cases of corruption.”

He added that turnout among Democrats was boosted by the ballot measure on whether to hold a state constitutional convention, which Democrats (and many Republicans) voted against.

Around the country, last week’s election was framed as a referendum on President Donald Trump. Burnett said the results in Virginia, where a Democrat was elected governor and the party gained seats in the legislature, could say something about Nassau County.

The North Shore went primarily for Curran, a county legislator from Baldwin, much as it has leaned Democratic over the past few years. Her opponent, Republican Jack Martins, a former state senator, won handily in only a few communities: Shelter Rock, Kings Point, Williston Park and Mineola, where he served as mayor for eight years.

“I have never seen an election like this,” said John Ryan, chairman of the North Hempstead Democratic Party, who has lived in the area since 1979. “The energy within the town was tremendous. I think [the voters] are looking at Laura as doing the same thing that [Town Supervisor] Judi Bosworth did in North Hempstead: increasing transparency and ending corruption.”

For Burnett, the Town of Hempstead played arguably the largest role in winning the race for Curran. With Curran taking North Hempstead and Martins taking Oyster Bay, Nassau’s most populous town provided the margin of victory.

In the strip bordering Oyster Bay, Curran was able to win or keep close in areas like Merrick and North Bellmore that have traditionally gone Republican.

He said he felt Curran’s success in Hempstead had a lot to do with a changing population.

“When you look at the demographics of Hempstead … you’ll see it looks more like Queens,” Burnett said. “It’s more diverse, the population is getting more and more dense. The people moving in … are not the old-style Republican.”

Ryan felt that Curran excelled at winning over independents and some Republicans.

The sentiment was echoed by Curran’s campaign, which pushed the message of ending corruption throughout the campaign while Martins jumped between issues like county finances and gang activity.

“Laura had a clear message – ending the culture of corruption and giving Nassau the fresh start it deserves,” said campaign spokesman Philip Shulman. “The people of Nassau clearly believe she is the change agent needed to create a government that uses their tax dollars wisely and appropriately.”

When asked about the election, the Nassau County Republican Party released a short statement.

“Politics is a cyclical business,” said party Chairman Joseph N. Mondello. “The Republican Party has weathered storms in the past and will certainly weather this one also.”

Even with all the bad press Republicans had attracted nationally and in Nassau, Martins had a slight lead in the polls going into Election Day. Burnett said he was surprised by the result and Curran’s 8,000-vote margin of victory, and said that it could indicate a future direction for elections in Nassau County.

“Voter registration over the past five years has been more Democratic … the gap between registered Democrats and Republicans has grown,” he said. “You can see things changing when [a Democratic win] happens in an off year when maybe you don’t expect it to, and maybe that’s where the county is going overall.”