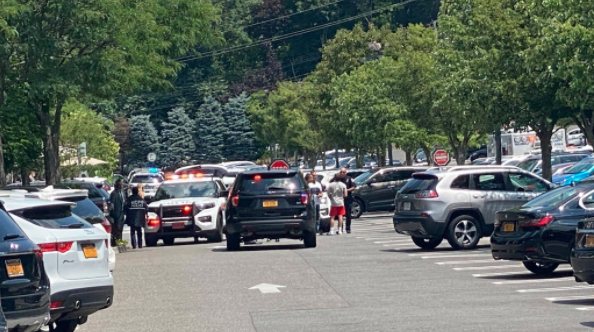 Police on the scene at the Americana Manhasset following a report of shots fired. Yuri Oluh, a Queens man connected to the shooting, has been sentenced to jail time for reasons relating to the incident. (Photo via Port Washington Life)

An alleged member of a Queens gang will serve four years in prison for his involvement in a nonlethal shooting that put the Americana Manhasset on lockdown last summer, a federal judge decided this month.

Yuri Oluh, 21, of Jamaica had been arrested on July 25 after a verbal argument with “an unknown male black suspect” in front of the luxury mall on Northern Boulevard led to the unknown suspect pulling out a weapon and discharging several rounds at Oluh, who was not struck.

According to court papers, Oluh then fled to a nearby Benihana restaurant and stuck a loaded .22 handgun under a sink in the establishment’s men’s room. He was found by police shortly afterward.

U.S. District Judge Joanna Seybert sentenced Oluh on May. 7. He will serve the four-year term in federal prison, followed by three years of supervised release.

The suspect who discharged the shots remains unknown and has not been caught.

Readers Wriite: Reflections after a victorious election
Next Article