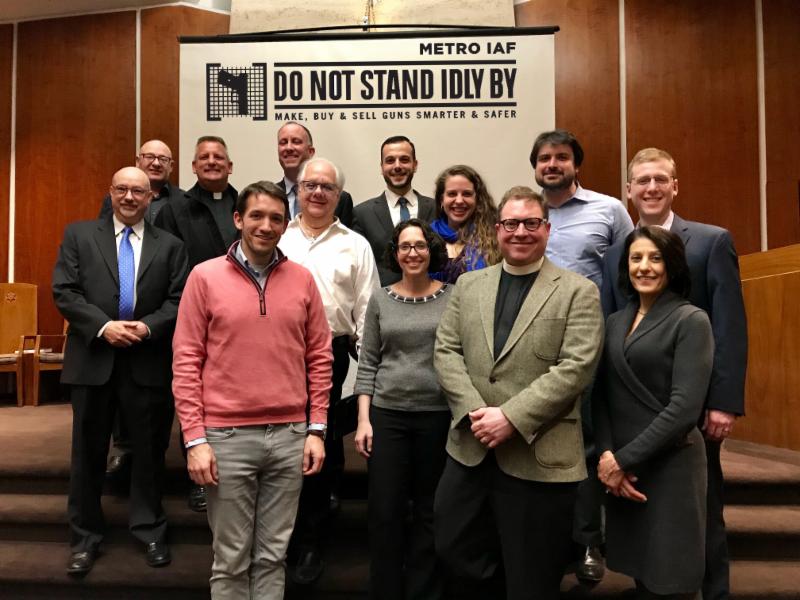 Rabbi Joel Mosbacher with some of the Long Island clergy who came to Temple Sinai of Roslyn to support the "Do Not Stand Idly By" campaign. (Photo courtesy of Temple Sinai)

On March 8, Rabbi Joel Mosbacher, co-chairman of “Do Not Stand Idly By,” a national campaign against gun violence, spoke to a packed audience at Temple Sinai about his mission to change the gun industry.

Mosbacher has first-hand experience with gun violence: in 1999, his father, Lester, was shot dead at his business on the South Side of Chicago.

Rabbi Mosbacher, now Senior Rabbi at Temple Shaaray Tefila, a reform congregation on the Upper East Side of Manhattan, works tirelessly to persuade leaders in every sector of our society to make a difference in reducing gun violence in America.

The “Do Not Stand Idly By” initiative, which takes its name from the biblical passage “Do not stand idly by while your neighbor’s blood is shed…” (Leviticus 19:16), targets the officials responsible for purchasing guns for their municipalities. Rather than focusing on Congress and legislative action to elicit change, the campaign’s approach is to ask mayors, governors, sheriffs, and police chiefs to use their purchasing power directly to address gun violence.

The ultimate goal of the campaign is for gun manufacturers to develop and utilize safer technologies as well as to crack down on the 1 percent of legal dealers whose weapons are used in approximately 60% of the crimes committed in the U.S. Currently, public officials in 124 municipalities have signed on to be part of the “Do Not Stand Idly By” campaign.

In the wake of the Parkland tragedy, the issue of gun violence has become even more urgent. At the event, Lois Schaffer, whose daughter, Susan, was murdered during a robbery in 2009, said that her story “is more relevant today than it was nine years ago. As gun violence escalates, the focus needs to be on saving lives.”

Mosbacher’s inspiring and hopeful message had a tremendous impact on the crowd at Temple Sinai. Congregant Sharon Russ shared that, “A few days ago, I said to my 18-year-old son, Max, ‘Every generation has to fix problems created by prior generations. You need to fix our gun problem.’ [Tonight], we arrived separately and did not sit together. But, when he caught my eye in the middle of the lecture I knew that a spark had been lit. And proud doesn’t begin to define the feeling.”

“We are horrified by the deaths of children in their classrooms and by the 30,000 deaths by guns every year,” White said. “Temple Sinai joins the movement to reduce gun violence because Jewish tradition commands us to choose life and save lives.”

Celebrating its 70th anniversary, Temple Sinai is a reform congregation on Long Island, located at 425 Roslyn Road, Roslyn Heights, NY. For more information about Temple Sinai or its many programs, please contact Alison Stamm, Executive Director at (516) 621-6800 or visit our website at mysinai.org. 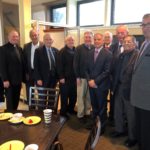