Thank you for highlighting former Israeli Prime Minister Ehud Barak’s recent visit to the Sid Jacobson JCC in your May 18 edition.

I think it’s more important than ever that the American public is exposed to a diverse pool of Israeli thought and opinion.

There were a few additional things Mr. Barak discussed, which I think are worth mentioning.

For instance, he told the audience that he tried to warn current Prime Minister Benjamin Netanyahu not to go through with his controversial address to Congress in 2015.

Mr. Barak also criticized Mr. Netanyahu for allowing an unconstitutional bill legalizing settlements built on Palestinian land to go before the Israeli Knesset for a vote.

When an audience member asked Mr. Barak what “the best way to combat BDS” was, he answered candidly, telling the audience that, as long as the Israeli/Palestinian conflict remained unresolved, BDS (the Boycott, Divestment and Sanctions Movement) would continue to exist.

One can personally agree or disagree with Mr. Barak on any of these points.

The important thing to note is that Israel is not a political or cultural monolith and being exposed to multiple perspectives enriches us all. 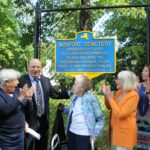