A young girl goes to the hospital to have her tonsils removed. A priest pays her a visit and rapes her. Another priest is in the confessional booth and ties his victim up with a rope. When the young man refuses to perform a sex act, the priest assaults him with a crucifix.

While these may seem like extreme cases, consider these statistics. A Pennsylvania grand jury found that some 300 predator priests sexually abused more than 1,000 children since the 1940s. Is this new? No! It has been going on for decades. Is the problem worldwide? Yes!

It exists in Chile, Australia and Ireland, among other nations. Pope Francis is the spiritual head of the Roman Catholic Church with its 1.2 billion followers. In the past, he had taken stands on issues which are quite controversial. One would expect him to be equally courageous in this instance.

One week ago, he demonstrated such principled leadership when he declared his total opposition to capital punishment. This took “guts” because he risked alienating a large segment of Catholic Americans who believe in the death penalty. One lesson we have learned from American presidents is that often it’s not the crime which “gets you” but the cover-up. This applies to the Catholic church as well. Many church authorities merely reassigned predator priests to new parishes without informing the faithful of the priest’s past behavior.

Cardinal Theodore Edgar McCarrick was accused of molesting an 11-year-old boy and tendered his resignation. To his credit, Pope Francis directed the Vatican secretary of state to accept it. Cardinal McCarrick is the highest ranking prelate to step down from the ministry. And this act on the part of the Pope is exactly what the victims of abuse have been calling for, namely, accountability. One must also credit Francis with saying the right things. He speaks of “repugnant crimes,” of ridding the church of this “scourge,” and of the church’s systemic failures. He also states: “With shame and repentance…we showed no care for the little ones… we abandoned them.” Sadly words are not enough.

The victims cry out for justice. Many lives have been ruined and, in too many cases, the guilty have escaped punishment. Pope Francis has a dual allegiance — first to preserve the good name of the church and also to represent the voice of the afflicted. This is a fine line to traverse. We know that Francis is a man of love and good will who will always strive to do the right thing.

We must hope that he succeeds… let us pray! 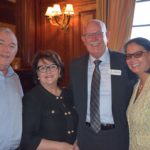