Steven Markowitz finally acknowledged, after denying it, that he sent the nefarious e-mail that was intended to stoke fear of Orthodox Jewish candidates.

What he failed to do was to apologize for using that anti-Semitic strategy in elections and budget votes (i.e. for library trustee, for school board member, for school board budget, two subsequent mayoral races) that were held since he sent that e-mail.

In all of these elections, his strategy was used to demonize Orthodox Jews in order to turn out the vote for his candidate or cause.  As the chairman of the Holocaust Memorial and Tolerance Center of Nassau County, Mr. Markowitz should know better.

What Steven Markowitz failed to do was tell the truth.

The vice chairman of the Democratic Committee of Nassau County and the president of the Great Neck Democratic Club did not know that James Wu, whose mother is the Chairperson of the Flushing Democratic Club, was a Democrat?

How sincere can Markowitz’s apology be if his letter is filled with fabrications? 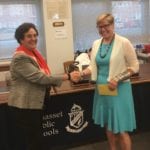